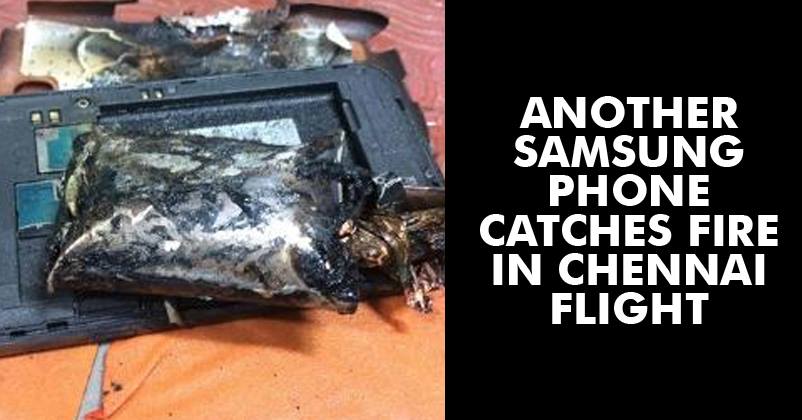 Samsung Galaxy Note devices are literally firing up into the record charts this year. Outperforming many flagship phones, it has certainly made a name for itself in every potential mobile customer’s mind. However, there is an another side to this story. Its name has got into the list where it shouldn’t have been. You might have a read a lot of news and stories on many social media platforms which is now criticizing Samsung Note series devices for accidently blowing off out of nowhere which is indeed very dangerous. Well, this news was just an another facebook post for one of the flyers travelling in Singapore-Chennai flight of IndiGo until his phone started fuming in flames. The phone was SAMSUNG GALAXY NOTE 2 ! Point to be NOTED. The phone was reportedly kept in overhead pin. After the crew members and passengers started smelling and sensing the smoke coming out of the bin, they used fire extinguisher to cool it down. The overhead pin was belonged to seat no. 23C and after learning about the fire that broke out in Airplane, the pilot alerted the ATC of the situation on board.

People started getting anxious and worried, however the crew member on priority relocated all the passengers to their seats and asked them to stay wide alert while the smoke was being emitted from a Samsung note 2 which was placed in the baggage (of a passenger) in the overhead bin.

After this incident, DGCA spokesman said, “We advise flyers to exercise caution while flying with Samsung Note devices . They should either keep these devices switched off or not travel with them”. Samsung was earlier hit this year by taking the decision of rolling back the new NOTE Series from many of its International Outlets because of the potential threat of exploding. The crew members were quick and efficient to react on this mishap by discharging the fire extinguisher which is a Standard Operating Procedure prescribed by the Aircraft Manufacturer. After using the fire extinguisher, the Samsung Note 2 was immediately transferred into a container filled with water in toilet. At the end, the plane made a normal landing and all passengers were declared safe and sound.

“We are thankful to passengers for their vigilance and cooperation extended to the crew on board,” the airline said.

After this news was out open in public, Twitteratis had the best reactions to it ! ! Here are some of them. Have a look ! !

Right now India's Defence Authority must be so confused about whether to drop Brahmos missiles or Samsung Note 2 on our ENEMY COUNTRY ! !

Dear @narendramodi ji don't use #nuke or any bomb to #pak just gift them Samsung Note 2 on diwali.

A Samsung Note 2 user while making presentations,
Boss: Man, You are on fire !
User: Thanks sir.
Boss: NO, I mean check your pocket !!!!!!!

Well, the reasons for such explosions is expected to be because of the overheating issues with the phone which eventually transfers to the battery causing explosion. These batteries are so energy-dense and can operate under such high power that they can combust in a particularly catastrophic way.

This is not the first time when Samsung devices have caused explosions. There have been many instances which made the Korean Company feel embarrassed on the International Platform for its poor image created by Note series.

WhatsApp Is Taking Away This Feature And Giving These Awesome New Features In Its Latest Update!
Meet ‘Pixel’ & ‘Pixel XL’ By Google! Here’s How Much They Will Cost !