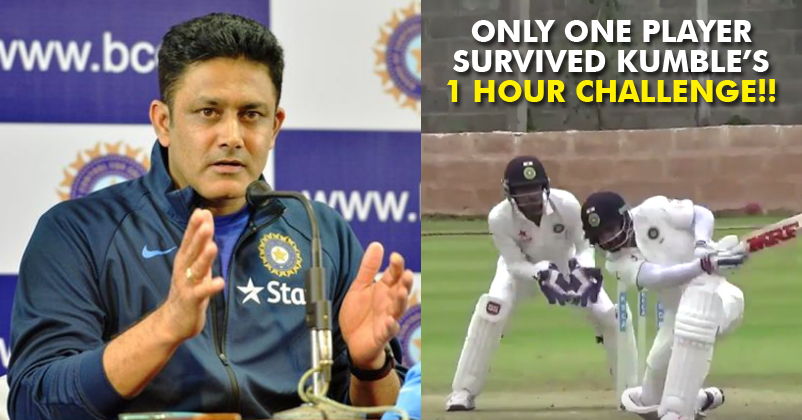 It is said that the best way to judge a cricketer’s talent is to judge him while he plays Test Cricket. Test Matches are the real test for any cricketer around the globe.

After a lot of discussion and rounds, Anil Kumle was announced the Coach For Indian Cricket Team. And now I feel that The Cricket Advisory Committee Members banked their expectations on the right person after the seeing the test results of Anil Kumble’s Unique One Hour Challenge that he gave to every Indian Cricketer. After a yoga session for the players, Anil Kumble took the Indian cricket team to Alur, 40 kilometres away from Bangalore for a unique test.

What was so special about the Unique One Hour Challenge ?

For Batsmen, they had to bat for full 1 Hour without getting out.

And for Bowlers, get as many wickets as possible.

Now this may not look so difficult for batsmen who are experienced enough to bat for hours while playing Test Cricket. But the results are shocking as well as good.

Only one batsman managed to bat throughout One Hour. The reason why I am having an optimistic approach towards such a bad result is because this result can help us know what is wrong with our batting line up and what necessary game plans we need to strengthen our team .

So here are the results.

Virat Kohli got out twice within 1 Hour. Opener Shikhar Dhawan also got out twice behind the stumps. On both the occasion it was Ishant Sharma who got him out. Both KL Rahul and Cheteshwar Pujara were run out once during their batting period. Now that’s a real concern for Anil Kumble and for all of us. If they can’t bat for even one hour on their own home ground against their own team bowlers, then how can we expect them to bat on West Indian pitches. But let us cheer up because it was just a practice session and although they failed in this test but as we say, ‘Failure is the pillar of success’, our batsmen will definitely rise again and will perform better.

Now all of you must be waiting for that one batsman who made it to the top of the list. Any guesses?

Well given the kind of lethal bowling that our bowlers were delivering, only a wall could have faced such attacks. Now before you all start mourning on the bad performance of our batsmen, let us just take some time and appreciate our bowlers for managing to get them out and that too twice in many occasions. So hats off to our bowlers ! !

Here is a video clip recorded by one of the spectator. Enjoy ! !

An Impossible Thing Just Happened! KRK Finally Apologises On Twitter
Good News For All! Guess Who Is Coming On The Kapil Sharma Show?