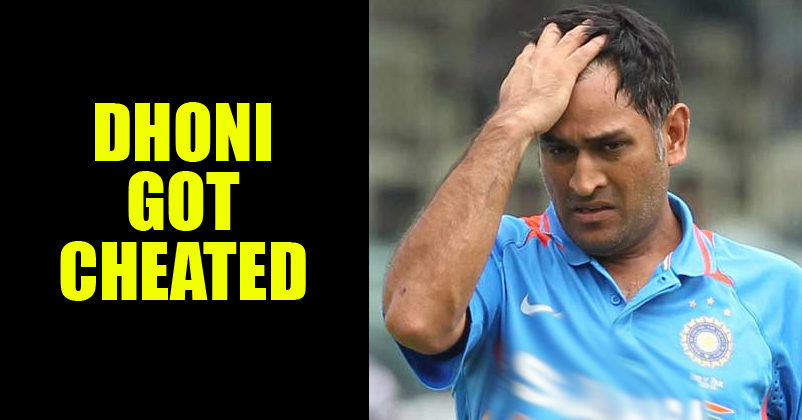 Its very unfortunate for a person who is considered as a benchmark of sportsmanship to get cheated in a game for which he being known for. In a span of more than 13 years, cricketers go through a lot. And in the midst of their frustration, they do things that they shouldn’t have done. But when we talk about M.S Dhoni, there are hardly a few things in his life, that he regret about. Such is his calm and composure. No wonder we call him ‘CAPTAIN COOL’. The smirky humorous captain with a cool mind. MS Dhoni, who despite his retirement from Test cricket still remains one of the biggest endorsement magnets in Indian Advertising market. Such is his dominance. His overall income through endorsement as stated by Forbes Magazine is whooping 27 MILLION USD. An Australian Sports Company ‘Spartan Sports’ had struck a sponsorship deal with M.S Dhoni in 2013 worth of Rs 13 Crores for the next 3 years. However, the royalty clause on the bat deal takes the amount somewhere close to Rs 20 crores. From the sources it has been reported that the 3 years sponsorship deal worth Rs 13 crore has gone sour with Australian based ‘Spartan Sports’, regularly defaulting on payments. According to Dhoni’s brand management company, Rhiti Sport, Spartan Sports has only paid four installments so far, the last which arrived in May 2016. Rhiti Sports are indeed considering legal action against the Sparta Sports Company.

When reporters asked further about the deal, Rhiti sports manager Arun Pandey did not elaborate before saying “everything is not smooth and hopefully the matter will be resolved soon”.

An interesting to note is that this news surprisingly came after a couple of days when Sachin Tendulkar was announced as an investor at Spartan Sports Company.

Rhiti Sports are planning to take legal action against the company which has its flagship store not only in Sydney but also in New Delhi.

Although there has been no statement released by or in the name of Kunal Sharma and Ravi Thakran (The current Managing Director and Founder of Spartan Sports) on this issue. These 15 Actresses Have Been Lucky Enough To Work With ‘All 3 Khans’ In Bollywood Industry!
Celebrities & VIPs Need An Appointment to Meet This 14-Year-Old Kid!