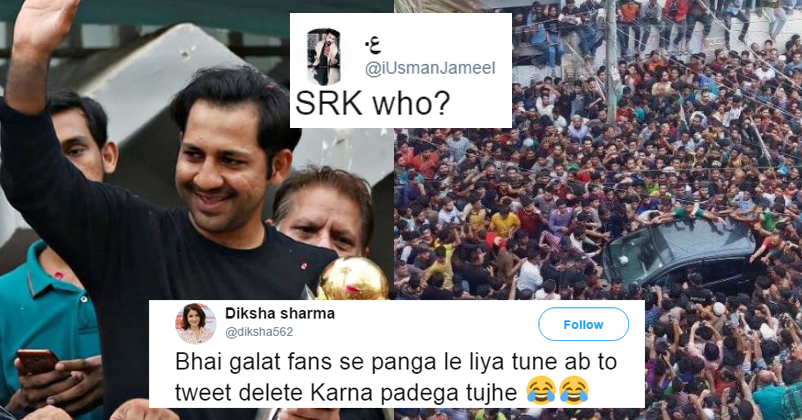 Anything and everything can happen on the internet these days; people can sometimes go to any extent of trolling, because for them, social media is a platform for time pass. Often, we see social media platforms turning into battle grounds; this is mainly when an India-Pakistan controversy is involved.

We saw this happening after ICC Champions Trophy 2017. First, Indians trolled Pakistanis and after their win, the other side enjoyed the pleasure of trolling.

If that was not it, a crazy Pakistani fan tried to tease India by tweeting against SRK. What happened is that he tweeted a picture of Sarfaraz Ahmed waving to the crowd (SRK style) and captioned it as “Who SRK? Basically, he wanted to show that just like SRK is popular in India, Sarfaraz is popular in Pakistan.

In short, he meant that Sarfaraz is their hero and that they don’t know who SRK is. Now, SRK-Sarfaraz comparison didn’t go down well with many loyal SRK fans. They massively trolled him and also made him realize that it was a BIG mistake to compare both of them; have a look at what he tweeted,

And here’s how he got it back from the SRK fans,

As much as I love the fact that my country won and sarfraz is being loved
But no comparison yr. It happened with sarfraz first time and may

His Net Worth is 10× More Than Pakistan Cricket Board 😂😂😂 Pakistan Who ? pic.twitter.com/NxvcuzQv3l

SRK who?
SRK he who's films have more crowd than this.. that too in theaters Karachi, Islamabad & rest of Pakistan.

waise to reply pane ki aukaat nahi h teri par lele..
Multiply your crowd of a lifetime by 10 to compare with crowd for SRK on normal day- pic.twitter.com/UgmQLNvrEr

SRK is SRK and no one can deny the fact that his popularity cannot be compared. Agree with these tweets?