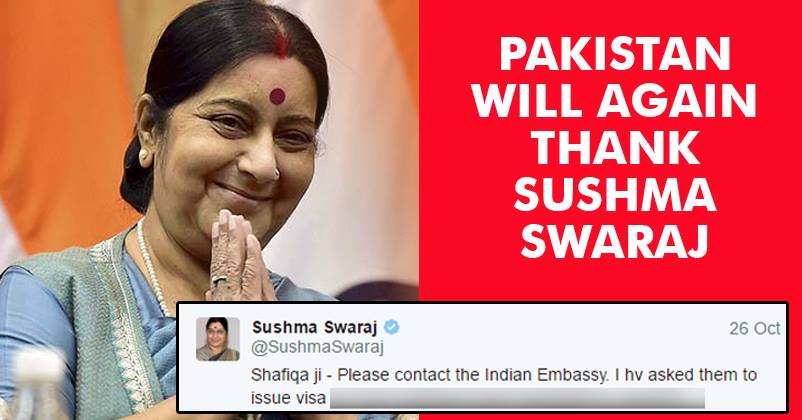 Foreign Minister Sushma Swaraj is one minister who is getting famous for all the good reasons every other day. She is being known for her prompt and helpful replies on Twitter.

Right from helping a Pakistani Hindu girl getting admission in India’s government school to helping a lady who lost her husband on a flight to Germany. Sushma Swaraj gave every possible help to the people who came seeking help from her. People got so impressed with this helpful gesture of hers that when controversies surrounded Sushma Swaraj, people stood by her and made #IStandWithSushmaSwaraj trend on Twitter

Anybody who does great work for the country is bound to be surrounded by controversies!! This time its @SushmaSwaraj #IstandwithSushmaSwaraj

Shafiqa Bano made the request via Twitter and asked for help…

She asked the minister to grant her a medical visa.

we are Indonesian citizens, previous nationality pakistan. will seeking treatment At Apollo Hospital in Chennai.

Shafiqa soon received a prompt reply from Sushma Swarag asking her to contact the embassy as she had directed them to issue her a visa.

Shafiqa ji – Please contact the Indian Embassy. I hv asked them to issue visa for your husband's liver transplant in Chennai. @IndianEmbJkt https://t.co/MgJXam8kE0

Though it’s mandatory to take clearance from the department for visa clearance concerning Pakistani-origin people, especially in applications made in third world countries. But, the foreign minister Sushma Swaraj took this decision on humanitarian grounds without referring her case to Indian home affairs ministry.

Sushma Swaraj has again gathered a lot of love and good wishes from Shafiqa Bano. Shafiqa couldn’t thank her much for receiving such overwhelming gesture from Sushma Swaraj.

Thank you so much Sushma ji. You are the best. Really appreciate all your help. ☺👍

Foreign minister’s involvement in this case even made the hospital authorities active. Take a look at their tweet…

1/2 @shafiqabano @gsbalaji1964 @SushmaSwaraj We have taken note of your query, we are in touch with you and

They even started working to sort out all the details.

2/2 working hard to get all the details sorted and get your husband here at the earliest for treatment.

Ma’am your dedication towards your work absolutely deserve applause! Sushma Swaraj is definitely an inspiration for all the people in power.

What do you think about Sushma Swaraj’s prompt decision? Do share your views in the comments section below!

Salute To IIT Students! They Taught Us The Real Way To Celebrate Diwali
Carla Dennis, The Hottest Model On Instagram, Is Driving Internet Crazy With Her Pics