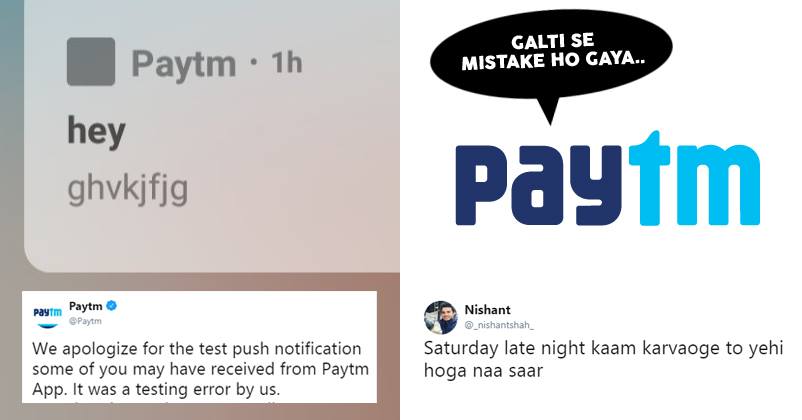 Paytm is quite a common application used by millions all over.It has become so popular that every alternate people are using it on a day to day basis.

Recently,a message sent by Paytm to it’s users,that too in the middle of the night created confusion among it’s users.The text read ‘hey’ followed by something like ‘ghvkjfjg’.

As the so called word has no meaning of it’s own,people were quite confused on having receiving that kind of text from the app.

Now,following over this confusion created by the application itself,they official posted an apology on fifth January on their official twitter handle.

We apologize for the test push notification some of you may have received from Paytm App. It was a testing error by us. We are ensuring that such errors are eliminated completely in future.

The actual reason behind these texts was that,this ‘push notification’ were sent to the users,mistakenly as they were testing it on a live server.

The users were quite taken aback as they feared hackers and even asked what was going on,but soon they learnt what actually happened.

Instagram also detected a bug recently due to which their feeds were scrolling down horizontally.They also shared the news via social media and cleared all confusion.

Due to a bug, some users saw a change to the way their feed appears today. We quickly fixed the issue and feed is back to normal. We apologize for any confusion.

Now,as we all know twitter has it’s own kind of reaction to everything.So,be sure to check these out.

I asked here how testing was going but you didn't even reply 😛https://t.co/YRBLveman3

So,What was your reaction?