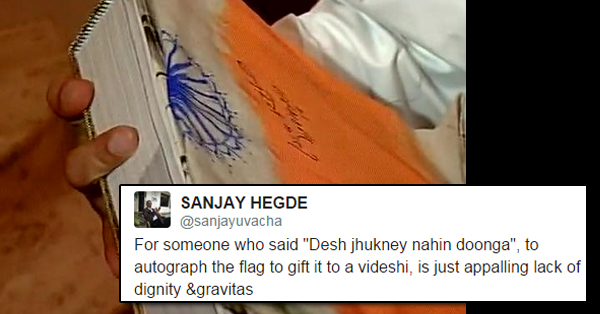 There is no way that there is no controversy over Modi’s name. Somehow MODI and controversy goes hand in hand. Yes yet again where till yesterday twitter was trending with MODI in USA tweets and there were signs of some positive tweets all day, today it turned out to be completely opposite and Tweeter since the morning was trending with #ModiDisrespectsTricolor.
Well last time he met Obama, it was all about his expensive 9 Lac suit and this time it is about his Sign on the National Flag. It happens to be that Modi himself pushed himself to a controversy by signing the National Flag which was meant to be gifted to the president of USA Mr. Obama through Chef Vikas Khanna who was given the opportunity and vested with the responsibility to show it to the the US officials the best of Indian Cuisine.

PM Modi autographed the Indian flag for President Obama to be handed over to him by renowned Chef Vikas Khanna. pic.twitter.com/2ES9TZ6zXK

As soon as the Pic of the flag went viral on social media, people alleged that Modi has violated the section V of the Indian Flag Code which prohibits any kind of Lettering or any such kind to be on the National Flag. As the controversy raged twitter started reacting on the controversy. Check out these tweets on the issue.

Ridiculous Twitter controversy over PM signing flag for @TheVikasKhanna to gift to Obama. Officials have now taken flag away to check code

Even Rajdeep got something to speak now

Modi Ji Misused the Flag, by Signing on it to be Gifted to POTUS by Vikas Khanna ,Disrespecting India is his Hobby now.

Signing flag for Obama, wearing 10lakh signature suit for Obama, what black magic has Obama done for Modi to repeatedly do the unsuitable

Flag code is a relic of the past when India was "led" by limpwristed,weak people. Discard it. In Modi's India, his sign is sufficient.

#ModiDisrespectsTricolor
Dear pm,
U also disrespected d Tricolor twice,
Once on Yoga day & again in US

EVEN KRK Had something to speak today

It was Make in India insignia with Ashoka Chakra gears hand painted by Smile Foundation children. Not the national flag.

Continue Reading
You may also like...
Related Topics:PM Modi Breaks Violates Section V of The National Flag Code, PM Modi Pushes Himself Into Another Controversy By Signing On The National Flag!! Check Twitter Reactions, Vikas Khanna

You Won’t Believe This ‘Bakri’d You Can Buy A Bakri Online Too..!!
This Naked Display Of Status By Drunk Lads Everyone Must Watch