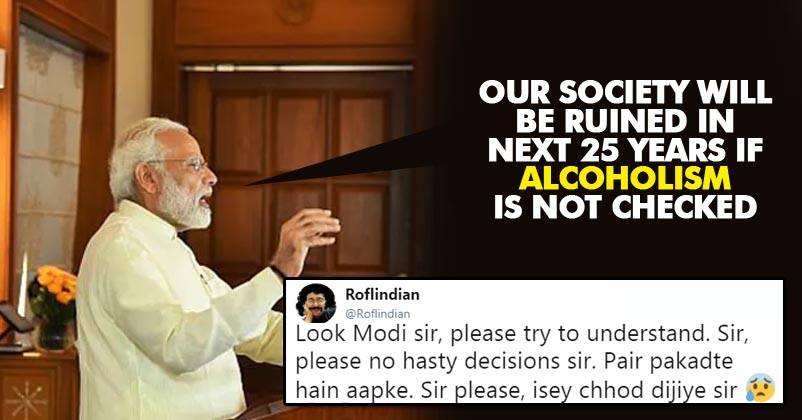 Last year in Diwali, PM Modi had given us a big gift named “Demonetization”, LOL. This time he might be back again with some Dhamaka. Yesterday, he addressed the concern of increasing “Alcoholism” issue among youth. As per Modi’s opinion, the society will be destroyed in next 25 years if this problem persists and if no measure is taken.

He expressed his concern over alcoholism during the inauguration of Ma Umiya Dham Ashram in Haridwar.

Now people are really worried. Is it a hint that Modi is going to ban alcohol just like he suddenly banned notes? At least people think so; since the time our Prime Minister has talked about this growing issue, people are going crazy. In fact, India broke all records in terms of alcohol sale yesterday and today.

Twitter has gone mad because they think Modi is giving them a hint of alcohol ban, which he failed to give during note ban. Look at the tweets;

Guys, stock your favourite alcohol before it's too late. pic.twitter.com/qzGxJBlh2N

I used to love surprises before!

I use to love surprises before Modi Govt.

Will it be total ban?

Will it be the 'total ban' on alcohol?

Am I the only person?

Am I the only person who is worried about will Alcohol Ban be announced by Modi today.
Yesterday he talked about it.

Oh no no please!

Will this really happen? Well we got to wait for that.

Continue Reading
You may also like...
Related Topics:alcohol, Modi

They Lost Their Jobs & Started Selling Vada Pav In London. Now, Annual Turnover Is 4.4 Crores
Have You Ever Wondered Why IPhones Are Costly In India Than Other Countries?