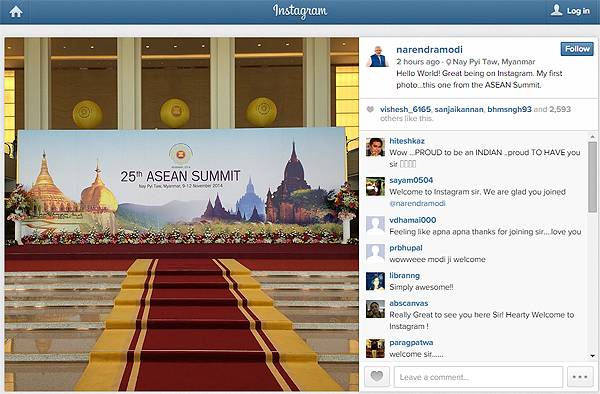 India’s Prime MinisterNarendraModi made his debut onInstagram, sharing a picture from the venue of the ASEAN summit.”Hello World! Great being onInstagram. My first photo this one from the ASEAN Summit, @NayPyi Taw,”Modi said in a post on his Twitter account.

Hello World! Great being on Instagram. My first photo…this one from the ASEAN Summit. @ Nay Pyi Taw,… http://t.co/3JOFpddt5R

Within hours of Mr. Modi posting his first image on Instagram, the Prime Minister was flooded with more than 40,000 followers.“At the Summit…captured a glimpse of the venue,” Mr. Modi tweeted alongside the picture of him taking the photo. Social media has been helpful for spreading out messages directly from the Prime Minister and build a strong leadership. It has been successful in opening up a direct channel of communication between people and the Prime Minister.

Continue Reading
You may also like...
Related Topics:Instagram, Narendra Modi