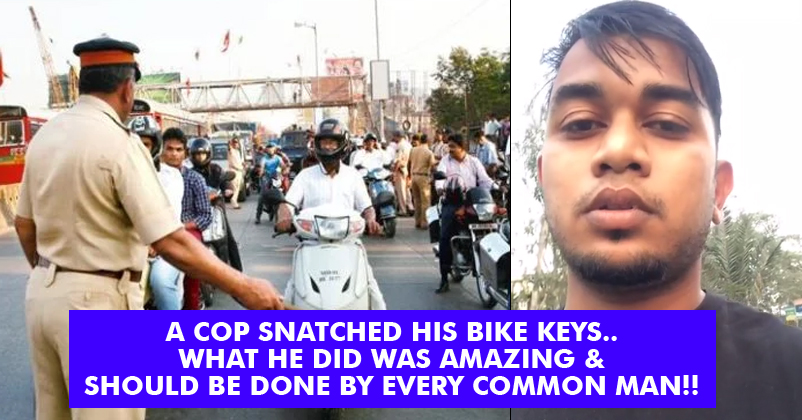 We often come across this question while we ride our vehicles on roads with a constant fear of getting caught by traffic police even if we haven’t broken any rules. Civilians in real life are very tolerant where they always try to ignore unnecessary problems. But when such situation arises where he feels like he is being harassed, he does his best to expose the truth and reality of the situation.

Partha P Boruah, a citizen of our country who also faced the same situation like many of us. His bike was stopped by the Police and he was interrogated for the next 3 minutes where they asked for the driving license and registered papers of his bike. Well, everything went well as he had all the documents along with him, but what irked him was the curiosity to wonder why and how come do these policemen in Khaki could perform the job that is only assigned to TRAFFIC POLICE. Do they have the right? Well, the moment he raised his voice against it, his bike keys were snatched away from him. Is that how they are taught ‘public dealings’? Just snatch away what they have and made them beg for it. But this time they messed up with the wrong guy. Partha P Baruah straight away went LIVE ON FACEBOOK where he recorded everything happening to him and people around him. Watch his video to see how the things unfolded after that.

In the video, you can clearly see that the Patroling car itself didn’t have any registered number plates. It’s the perfect example of ‘Law protectors being Law breakers’. What is more important is to address the fact that such Policemen cannot stop your vehicle and snatch away your keys whenever they feel like. According to Right To Information (RTI) filed by advocate Pawan Parikh, it is said that taking out the key of any two or four wheelers is completely wrong. No policeman, irrespective of any rank, has the power to do this. So who were they in this video who had the audacity to perform such acts of snatching away commuters key when they asked simple questions.

Partha P Baruah again went live Facebook after this incident to explain things with much calmer mind and temper. This time he explained every single bit of the incident in a language suitable for us all. Have a look at it.

It should be brought to the notice that only an officer of rank higher than HEAD CONSTABLE in Traffic Police has the power to stop commuters and interrogate them.

After this incident on 14th February 2017, he went through his first interrogation and was later asked to go through medical check up. On that day itself, he was taken to CJM Court where he was charged under IPC 294 AND IPC 353 for use of offensive words in public and assault and deter public servant from discharge of his duty. Refer this picture. The irony in this whole incident took a slingshot to Mars. He is currently in police custody for the next 14 days and this is how JUSTICE WAS SERVED to a person who opposed them. No actions were taken against the policemen who harassed the commuters in the name of ‘checking’ even when they weren’t designated for that post. No actions were taken against the snatching away of his keys, but it was made sure that he should be charged for expressing his frustration which was apparently built by the policemen themselves.

What are your views about this whole incident? Please share your opinion in the comment section below.

This Man Complained About Indigo’s Service! Indigo’s Dumb Reply Made Him Even More Furious!
WOW! Geologists Have Discovered The 8th Continent Of The World & You Need To See It!