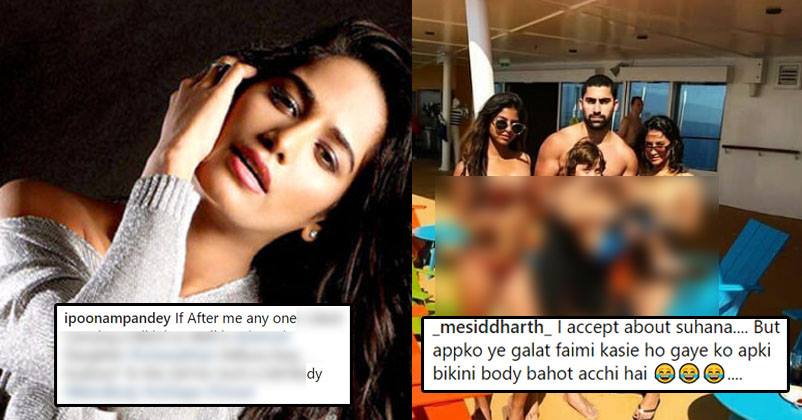 These days, Suhana is busy enjoying her Italy holidays with family. She keeps her fans updated with pics, but looks as if it’s trollers are troubling her to no end.

Few days back, she was slammed for kissing SRK and recently, she became a target of trolls for wearing a bikini and flaunting it on Instagram. Trollers have no job but to comment on her figure and make her realize that she’s a Muslim.

Although there were many who trolled her, there were some who supported her too. One among them is our hottest adult star Poonam Pandey. She shared Suhana’s bikini pic on Instagram and praised her for having such a hot body. Not only that, Poonam even compared her bikini body with Suhana.

She wrote, “If After me any one i Liked Carrying a Bikini so Well is @iamsrk Daughter #SuhanaKhan Helluva Sexy.. Kudoos!! To this Girl for Such a Gr8 Body #BikiniBody #inShape #Toned”

People slammed her left and right for making this comparison. They told her that she’s nowhere close to Suhana’s daughter. Here are some selected comments;

Poonam needs to think twice before comparing herself with others; if she continues, she will always end up getting trolled like this.

Makers Released Transformation Video Of Ranbir To Sanju. It’s Too Good
Deepika Wished Ranveer In The Most Hatke Way. We Loved This