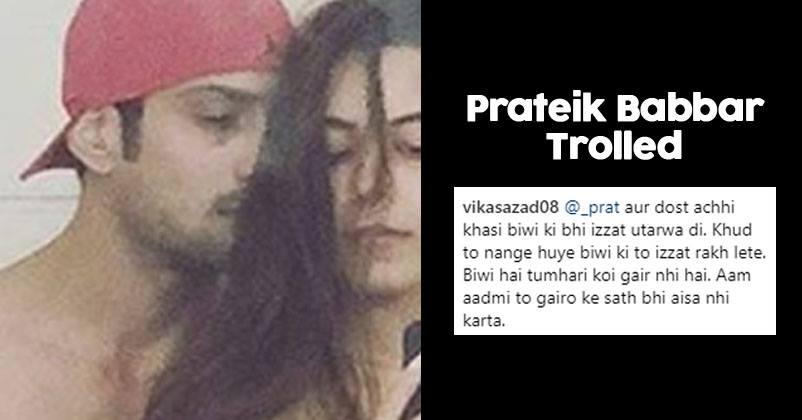 Actor Prateik Babbar who is playing the role of bar owner Jeh Wadia in the Amazon Prime series entitled “Four More Shots Please” has been mercilessly trolled by social media users for posting a photo in which he is seen with his wife.

Recently, he got married to Sanya Sagar, his long time girlfriend and a movie producer-director by profession, after he proposed to her in Goa. The couple was having a great time after marriage but on the Valentine’s Day, Prateik took to Instagram and posted a topless photo of himself with his wife that made him an object of mockery on social media.

Netizens slammed Prateik like never before because in the image, they both are topless and he can be seen hiding the private parts of his wife with his hands. He captioned the photo, “More like it!.. happy valentines!”

Here are some of the comments posted by online users:

After getting slammed, Prateik deleted the photo from his Instagram account but it was too late and the damage was already done since it was shared and saved by many others.

Prateik, son of late Bollywood actress Smita Patil and actor turned politician Raj Babbar, has not been able to make big in the Hindi film industry but he is still managing to get side roles in movies. Sanya belongs to a political background as her parents are politicians and she has completed her graduation from National Institute of Fashion Technology.

Kapil Sharma Speaks Up On Sidhu Getting Sacked From His Show, Fans Now Want To Boycott Him
Top 5 Bollywood Stars According To The Business Of Their Last 5 Films. Ranveer Replaces SRK