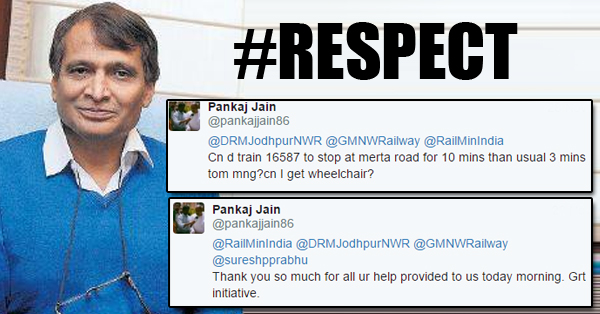 Couple of days back we have shared with you an Incident which restored our lost faith on Indian Railways back again. It was about a women who was being harassed by a man in the train compartment. Finding herself in a weird situation she tweeted about her difficulty and directed it to Indian Railways/Railway Minister. To her shock immediate action was taken and the man was held on the next station.
Indian Railways & Railway Minister Suresh Prabhu received tons of Appreciation from people across the nation for the quick action taken.
Twitter witnessed similar incident yet again. Pankaj Jain, a man from Karnataka was travelling from Karnataka to Bikaner. He was travelling along with his ill father who happened to be a Paralysis Patient. Pankaj was concerned about his father as the train halted at his destination stop for just 3 Minutes. So he tweeted :

He directed the tweet to Indian Railways & Mr. Suresh Prabhu asking if the train can halt at the stop for some more time and can he get a Wheelchair assistance.
He further tweeted:

@DRMJodhpurNWR @GMNWRailway @RailMinIndia I m traveling with my dad who is a paralysis patient. Need an assistance. @dr_asr

Railway Ministry again responded quickly to his concern and asked him for details.

And what happened next is just heart warming. The next morning the Railway staff in chilling cold didn’t just halt the train for 10 minutes but even arranged for a Wheelchair.

@RailMinIndia @DRMJodhpurNWR @GMNWRailway @sureshpprabhu
Thank you so much for all ur help provided to us today morning. Grt initiative.

@RailMinIndia wit a wheelchair as my dad is bedridden patient. And everyone did cooperate & @DRMJodhpurNWR @GMNWRailway @sureshpprabhu

@RailMinIndia and helped us to get down of train n move out till the gate. Grt effort. Kudos. @DRMJodhpurNWR @GMNWRailway @sureshpprabhu

He went on to thank Indian Railways & Railways Minister Mr. Suresh Prabhu for the great help offered to him.

This surely shows us the Signs of MODI’s Digital India and surely gives us the sense of ACHE DIN!! Kudos to Indian Railways & Railway Minister SURESH PRABHU 🙂