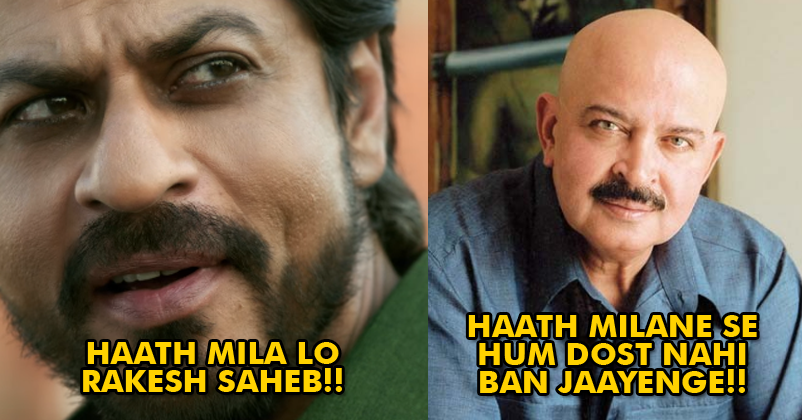 Rakesh Roshan to SRK is what Yograj Singh is to M.S Dhoni. Recently today we showed you the sweet twitter chat between SRK and Hrithik Roshan which showed the whole world that things are normal between them even if they are competitors for each other. But well within 20 odd hours, things are heating up once again.

This time, it’s Rakesh Roshan who raised the issue again. Rakesh Roshan had earlier predicted good business for the both the films. But now, things are getting little tricky. Rakesh Roshan is upset because of the unfair distribution of screens for the movie. According to the TOI reports, Raees and Kaabil have 55-45 share (in favor of Raees) and at single screen theaters, it is at 60-40, inclining towards Raees again. So as it stands now, Raees approximately has 2700 screens while Kaabil has 2200. Given the kind of biasing that has been done against Hrithik Roshan’s Kaabil movie, it definitely seems that movie won’t do great in terms of financial business as compared to SRK’s Raees movie.

This made Rakesh Roshan quite upset which made him say,

“It’s very unfortunate I got up in the morning I saw in the papers. It’s 45-55 now. I don’t know for sure. It is not correct. I am very shocked I don’t get into any kind agreement because I never thought this would come my way. It’s very unfair because all over the world be it Dubai or London or Australia or new Zealand, they have all gone for 50-50 except our industry in India even after giving me assurances’ “I smelt something is wrong somewhere. So I showed them two reels because they always feel I make wrong films. But then when I succeed, they all congratulate me. For Kaabil also the same thing happened. Because this time we had a strong opponent. In my entire career, I have never shown my film but I had to show one hour of the film to change their mindset. But still in the morning when I saw this I was hurt that after giving assurances that it will go 50-50 they have still done what they had to do.”

He further criticized the industry for playing it in an unfair manner with the dirty tricks. This is what he said,

“I thought this industry will get mature day by day with all the corporate coming in. But it is getting dirtier and dirtier and we are going backward. I have told them to avoid such clashes because it’s not good and ethical for the film. The producers are losing, distributors are losing, exhibitors are losing, the audience is losing, who has so much money to go and watch two films? You are depriving so many people of so many things. The only way to go about it is by going 50-50. So that others when they come with such clashes they will think twice.” He didn’t hold back to criticize the kind of fakeness that is trending in Bollywood. He further added, ‘Everything is getting dirty and unethical. No professionalism, no friendship, it’s (Bollywood) not a close knit family at all. It was in my time. Jeetendra, me and Rishi Kapoor are best of friends even today. That was the industry we were working in. Now just shaking hands that also we don’t know what they mean. Putting up a smile and kissing each other’s cheeks in front of the media. That’s not friendship.’

So what do you think about it? Isn’t he right that every single time someone plays some dirty trick in an unethical manner just so as to earn some money at the cost of losing friendship and respect? Please share your opinion in the comment section below.