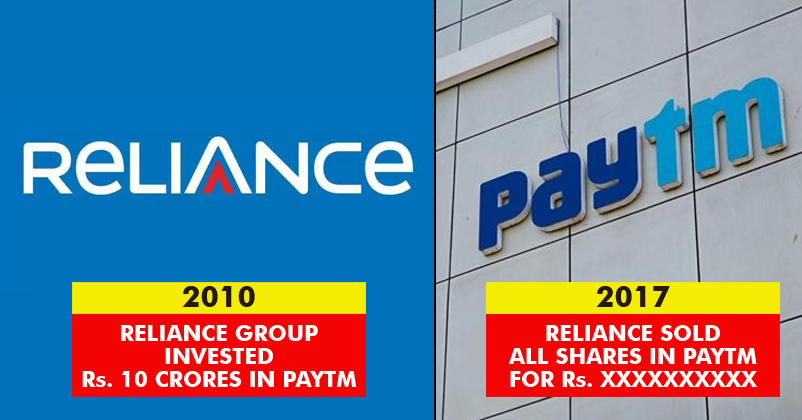 Paytm’s business has increased manifold after the demonetization of Rs. 500 and Rs. 1,000 currency notes as government has been very strongly promoting digitization of monetary transactions. The customer base of the online payments and mobile wallet service provider crossed the mark of 200 millions in February, this year.

As per a source, Reliance Capital, the financial services company of Reliance Group, has sold off its 1% stake in Paytm for Rs. 275 crore to Chinese e-commerce company Alibaba and Ant Financial, the payments affiliate of Alibaba. This can be called one of the smartest investments (if we look at the return on investment) by Reliance Capital in 2010 as at that time, Reliance invested Rs. 10 crore for this 1% stake in Paytm. Anil Ambani led company made this investment just before the proposed IPO of One97 Communications, which is the parent company of Paytm. However, the proposal of IPO was aborted later. Reliance Capital was in talks with many buyers for more than a month now and this partial sale has earned more than 25 times profit for the ADAG Group company. However, no comment has been made on the sale by Paytm as of now.

Alibaba and Ant Financial hold 40% stake together in $4.8 billion worth One97 Communications and this can be a move to consolidate their holdings in the online retail portal. Just recently, Alibaba invested $200 million in Paytm e-commerce which has been demerged from One97. The designing of the e-commerce portal will be inspired by Tmall, the Chinese digital platform of Alibaba. There are other investors as well who want to buy a stake in One97 Communications but nothing can be said with confirmation as of now.

It was also reported by Economic Times, in the month of January, that the chairman of Hero Corporate Services, Sunil Munjal, and Saroj Poddar, chairman of fertilizer and engineering services giant, Adventz Group, are trying to get a deal from Nikhil Vora who was an early investor and former Securities Analyst at IDFC.

In December, the founder of Paytm, Vijay Shekhar Sharma sold 1% of his shareholding of One97 Communications for Rs. 325 crore for the purpose of raising money for the payments bank entity. The Payments Bank of Paytm will start its operations by the end of 2016-17.

By December 2017, One97 wants to make a strong offline push to add 10 million merchants and is bent on investing around Rs. 600 crore for the purpose of building backend for the QR code-based payments features, keeping in mind its offline merchants.

Do let us know what you think of this move by Reliance in the comments section below.

Rahul Gandhi Passed A Very Silly Statement About Michelle Obama! Twitter Couldn’t Stop Trolling Him
8 Misconceptions About North-East India That Should To Be Debunked!