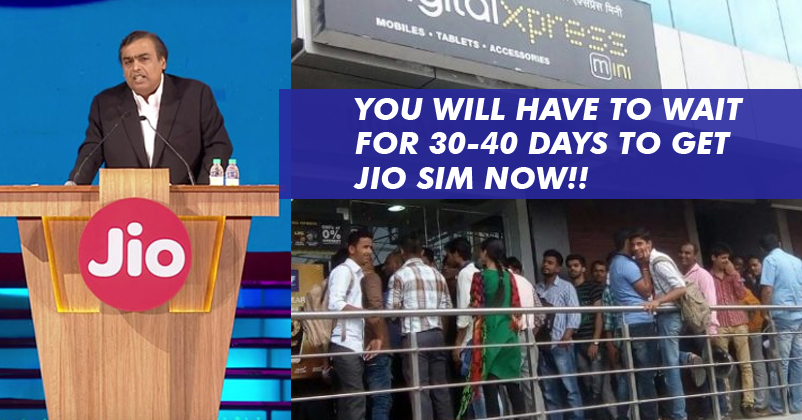 Reliance Jio has taken over the market, it has created a frenzy in the nation with its lucrative offers. It looks like Jio is having a hard time to keep up with all the promises. People are standing in long queues outside the Reliance Digital store, but they are told to wait for a month to avail the Jio SIM.

Reliance Chairman promised that Jio will change the landscape of mobile internet in India. “Jio” means to be alive, to power the people to be alive and to let others live. But so far the company hasn’t delivered on their promises. The JIO services were launched commercially for everyone on Monday, but the customers are already complaining about unavailability of SIM cards, standing in long queues outside stores and delay in activation.

Customers are waiting in long queues outside the JIO stores to get their JIO SIM cards. The JIO stores have already run out of the SIM cards. After long queues of eager customers rushing to their stores, they are facing a scarcity of JIO SIM cards.

Customers reported that there was a dearth of SIMs at the Reliance Digital stores, but the local dealers had the JIO SIMS in their stores. They were charging between Rs 300 and Rs 600. SIM cards are available free of charge but the dealers are charging for them, making a lot of money from them, thanks to the shortage of SIM cards in the JIO stores. A Reliance Digital store employee said that the local dealers had acquired SIM cards in bulk and were selling them at very high rates.

Customers are dissatisfied with their experience with the JIO. Gurudutt Biswal, a 24-year-old PR executive, who spoke to BGR said,

“To begin with, the experience was not good at all. Although there were less than 30 people at the store when I went there at around 2:00PM in the afternoon, the store had already run out of Jio SIM cards. And what’s surprising is that the employees at the store were unaware of the procedure and plans launched with Reliance Jio.”

It looks like the eager customers who have been waiting like forever to experience JIo are left with a bad taste in their mouth. People are not happy with the Reliance Digital stores, they are waiting in queues for hours, and the stores are only serving the customers who have registered with them earlier for SIM cards. Many customers are about their SIM cards not been activated since more than 10 days.

@reliancejio hey there ur customer care is not picking call since half an hour it's been 20 days & sim isn't active pic.twitter.com/QgU2eDqOrG

@reliancejio Whre in pune jio sim is available? all say out of stock?

@reliancejio @RelianceMobile Pathetic service regarding Jio Sim. Most of the Reliance Digital stores in Delhi have closed full day

@reliancejio unable to call 1977 despite receiving the msg to activate the sim..plz help

@reliancejio SIM/Router distribution and reach in Wakad,Pune is pathetic. #Ground #Reality. Is this the #JioDigitalLife?

He’s got a point!

Due to the unavailability of the SIM cards, black marketing is on the rise and ‘free’ sim cards are being sold for anywhere between Rs 200 to Rs 2,000. Is this the digital India we were looking for?

@reliancejio unable to get jio sim in Vijayawada from ur outlet, due to black marketing of Rs 500 .do something to help.

Reliance Jio SIM is getting black-marketed at Rs. 300 by mobile shops in Pune. Now that's demand and supply gap for India's digital highway

@reliancejio Ur sim cards are being sold in black ranging frm Rs. 200/- to 1000/-
Is this the jio ul promised? Location belgaum

So guys what do you think? Reliance JIO made its presence felt in the world with its revolutionary tariff and services, but they didn’t deliver on everything they said. Do you think Reliance can realize the dream of Digital India in a year or two, or is it pretty distant now? Comment your opinions and views in the comments.