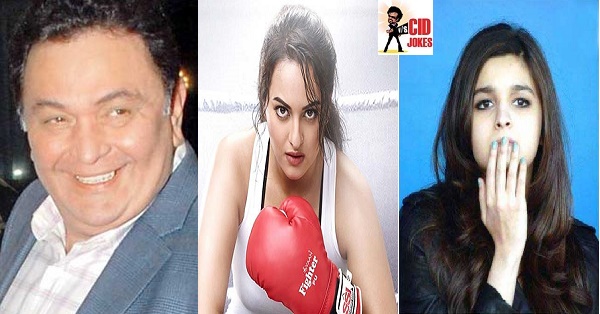 Sonakshi Sinha has always been facing criticism and is being a victim to people’s jokes and the reason for the same is that she is not much slim as other Bollywood actresses are. In other words, her weight has been a problem for her and why not, Bollywood is the industry of fashion and glamour where being overweight is no less than a curse. The recent addition in this connection is the joke made by Rishi Kapoor on Twitter which indirectly involves Alia Bhatt and is intended to make fun at her IQ and with help of this, he targets Sona for being little heavy. Although such kinds of gags and memes are not new as far as Sonakshi’s weight is concerned; yet yes, we don’t expect this cheap joke from such a brilliant actor of his era. That’s why, Mr. Kapoor became a victim to everybody’s anger and thought it appropriate to delete the tweet. However, the response of Sona with regard to this matter is really commendable and a proof of her good wits when she says, “I am sure this wasn’t created by him. It’s been something that has been going around for a while. Maybe he just found it funny, that’s OK, that’s his opinion. It’s his sense of humour. It is fine, it’s meant to be taken the right way.”

HATS OFF to Sonakshi Sinha for such a mind-blowing counterblast which must have hit Rishi Kapoor strongly!!

Meet The KING Of RS.1000 CRORE CLUB – Irrfan Khan
The “IIT Cracker” Dalit Brothers Pelted With Stone At Their Own Hometown