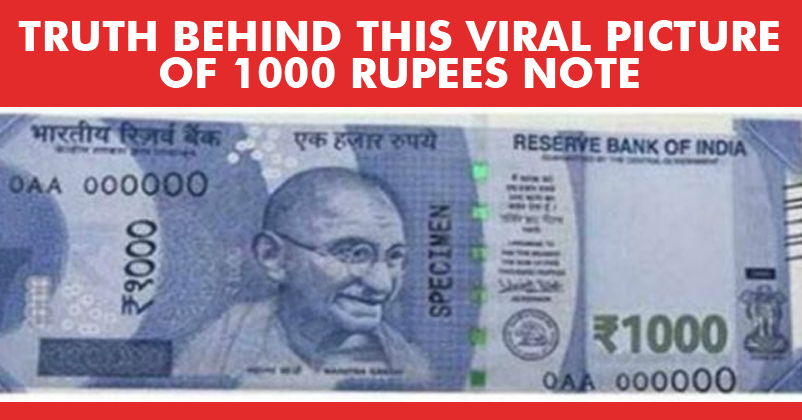 Social media is a place where skills like photoshop and editing are considered as a plus point. It’s quite easy to spread messages, particular the fake ones. Since few days, a particular message is doing rounds on social media about the return of Rs 1000 note. Here is the screenshot.

Well, before someone could justify and ask for the authenticity of this message, people consumed it at large and considered it as a legit news. But sadly, it was not. It is a fake photoshopped picture and the government has clarified that no such decision has been taken for the Rs 1000 denomination. Before 8 November 2016, Rs 1000 was the highest valued currency in India. But after the demonetisation of the old notes and introduction of new Rs 2000 & 500 notes, everyone started waiting out for new Rs 1000 notes.

However after addressing this fake news, government has opened up a bit about the arrival of the new Rs 1000 notes. According to them, they are indeed planning to introduce them into the system, but haven’t mentioned any specific time. After 3 months of Demonitization, it seems like everything is coming back to normal. During these 3 months, the country went through a phase of total cash shortage.

It’s our sincere request to all our readers to kindly spread this article on every post that claims such kind of rumours to be true. What do you think about it? Please share your opinion in the comment section below.

SBI ATM Dispenses Fake Notes From Children Bank Of India! You’ll Be Shocked To See The Similarity!
SBI Reacts To Fake Notes Controversy! Here’s What It Has To Say…