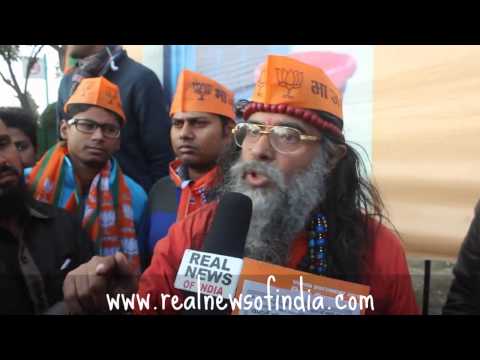 This video features Swami Om ji who is contesting election from New Delhi constituency on the ticket of Hindu Mahashabha. He is an ardent supporter of BJP and as per his claims, he was fighting election just to divide the votes of AAP and Congress. This video tells us how strongly a saffron fanatic hates Kejriwal accusing him for being a traitor. He has also published a book which reveals why Arvind Kejriwal is being called a turncoat. Moreover, he claims that all the information is made available in the book which can confirm that Kejriwal is really worth assaulting. Not only this, Swami Om ji bravely and proudly confirms that he has thrashed Arvind Kejriwal on January 21, 2015 intruding in his home after handing him the book. Swami ji also threatens him that if he does not stop here and keep on ruining our nation, he will kill Kejriwal in the same way as his party did to Mahatma Gandhi. Is this the real face of BJP or should we actually allow such extremists freely walking and issuing threats to the public figures of the country?

This Video Tells Us Why Should We Celebrate Valentine’s Day?
How far is it just and right to take action against AIB Knockout?