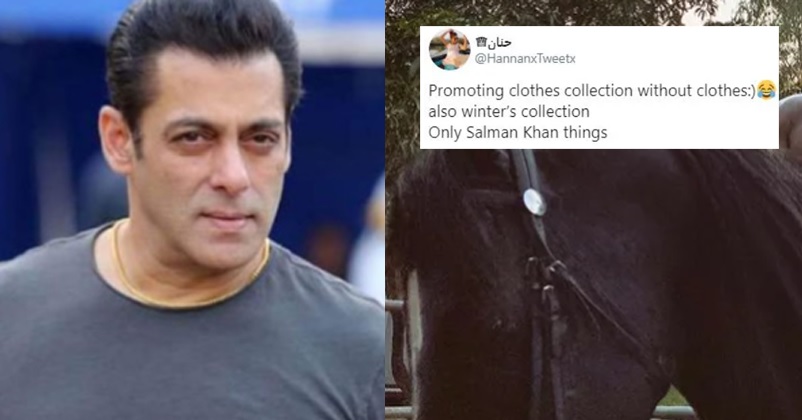 Bollywood superstar Salman Khan is one of the most successful actors of the present times and he also owns the Being Human organization which is into many businesses, such as clothing, health products, etc. Recently, the “Jai Ho” star took to Twitter to announce that Being Human’s Autumn and Winter collection is coming soon but netizens found the photo used in the tweet inappropriate with the announcement so they trolled him heavily.

In the photo, Salman Khan is seen shirtless sitting on the horse and people were not able to understand what type of advertisement he is doing for clothing when he himself is not wearing any. There were some who admired his chiseled and toned body but others felt that he is promoting the invisible shirt.

Winter is coming 🙄 but where is your clothes 🥴

How is the photo related to the announcement.. 🤔
Is the autumn/winter collection invisible ?

So no shirt this winter ??

Bhai is this winter collection near equator 😀

Salman Khan spent the coronavirus lockdown in his Panvel farmhouse with his family and friends and during this period, he also recorded some songs which became very popular among his fans. Salman Khan is also involved in many social activities through his Being Human organization and during the coronavirus outbreak, he helped many daily workers in monetary terms.

Presently, the “Wanted” actor is seen on the small screen on the weekend as he is the host of the controversial reality show Bigg Boss 14. He has some big movies lined up such as “Radhe: Your Most Wanted Bhai”, “Kabhi Eid Kabhi Diwali” and “Kick 2”. It is also being said that Bhaijaan will make a guest appearance in Shah Rukh Khan’s flick “Pathan”, the shooting of which has commenced. SRK and Salman have done cameos in each other’s movies earlier as well; for example while Salman was seen in SRK’s “Zero”, the King of Romance also did a cameo in Sallu’s “Tubelight”.

What is your take on the promotional tweet made by Salman Khan?

Pankaj Tripathi Reveals His Favourite Bollywood Actor Whose Every Movie He Has Seen
“You Can’t Take Away Something That Is Not Destined To Be Yours,” Badshah On Yo Yo Honey Singh