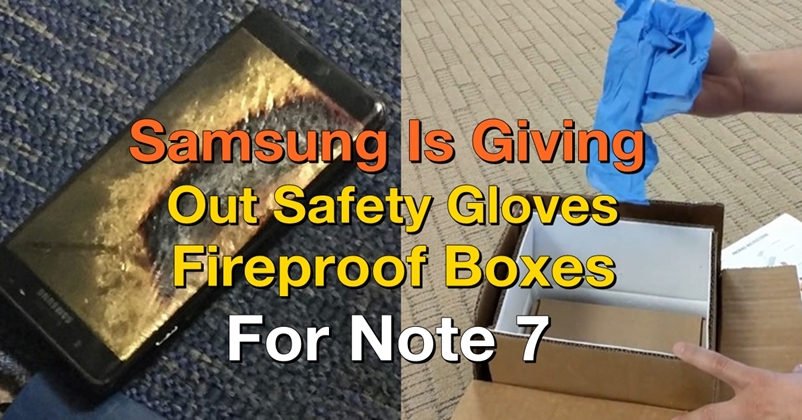 On Aug 19, Samsung launched its Galaxy Note 7, but ever since its launch, the igniting Galaxy Note 7 phones keeps catching fire. As a result a warning was issued about the phone catching fire and passengers traveling through flight were instructed not to turn it on. The Galaxy Note 7 phones resulted in house fires, plane delays, and transpired governmental investigations. When FAA (Federal Aviation Administration) issued the warning regarding the phone, this spread like fire across the world, as a result the company’s stock suffered badly. Samsung Electronics Co Ltd. is giving out fireproof boxes and protective gloves to customers returning potentially explosive Galaxy Note 7 phones. This is going viral on the internet. Samsung’s move is to offer fireproof packaging to customers who bought the Note 7 from its website has sparked a storm of humor on the internet.

Ever since the news of Samsung’s Note 7 disaster has gone viral, the company has permanently halted the production of its Galaxy Note 7 smartphone in less than two months. It was reported that some batteries caught fire, even the replacements models were blown. This tarnished the brand image of Samsung,

Samsung fireproof boxes? Have they been tested? https://t.co/8XXqfT6YfC

A video uploaded by Android developer news site XDA Developers on Tuesday showed the box which includes a “return kit”, also including a fireproof box with a “forbidden for transport by aircraft” warning and blue gloves to handle the device.

The users on internet took a jab at this, take a look at this tweet

Sprint Corp (S.N) spokeswoman Laura Lisec said retail employees had been instructed to take out the phones from packaging, shut them down and place them in the heat-proof boxes. Verizon Communications Inc (VZ.N) spokeswoman Kelly Crummey said that the retail stores have separately stored the returned Note 7s. New Law – Men Can Divorce Their Wives If She Denies Sex For Long Time!
Neil Nitin Mukesh Gets Engaged To This Mumbai Girl! You’ll Be Surprised To See Her!