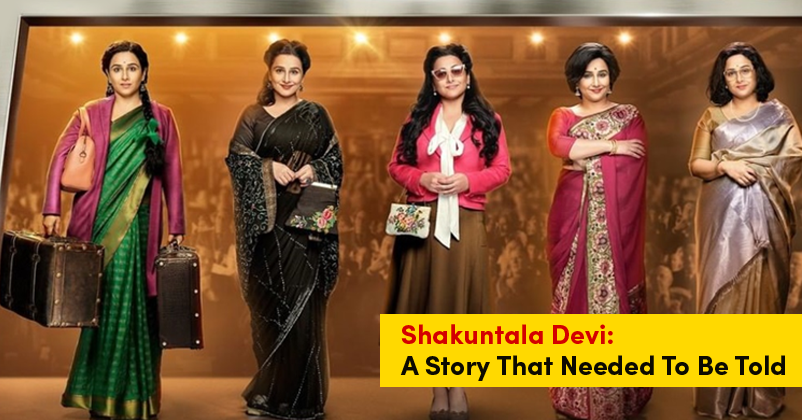 Shakuntala Devi, the newly released film on Amazon Prime Videos is one amazing experience. It depicts the life story of India’s very own “Human-Computer”, Shakuntala Devi. The lady who could calculate faster than a computer. The lady for whom maths was not formulas but magic.

Directed by Anu Menon and enacted by Vidya Balan, the story starts from a small town in Bengaluru where a 5-year-old girl is solving cube roots of large numbers. And thus we are introduced to Shakuntala Devi. And from the very first moment, the film spell-bounds us.

From a small town in Bengaluru to a country as big as England, Shakuntala Devi displays her capabilities everywhere and earns a page in the Guinness Book Of World Records.

Alongside her love for maths, she has a professional life. A life that involves broken relationships, hard choices, and unseen circumstances. But alongside all this, one thing that remains constant and above all is her love for maths.

The character is brilliantly played by Vidya Balan, who has took it upon herself to depict the strong, bold feminist Shakuntala Devi was. The side cast of Sanya Malhotra and Jisshu Sengupta have also played their role to perfection.

The film keeps you hooked throughout and there is never a dull moment. The fun with numbers, the real-life problems, everything adds up perfectly in making a blockbuster film.

This story is our very own and it needed to be told. And it won’t be wrong to say that not many could have done it better than the duo of Anu Memon and Vidya Balan.

Highly inspirational. A must watch.

Gulabo Sitabo: Simple, Beautiful, And Elegant. A Must Watch.
How To Write A Good Movie Review?