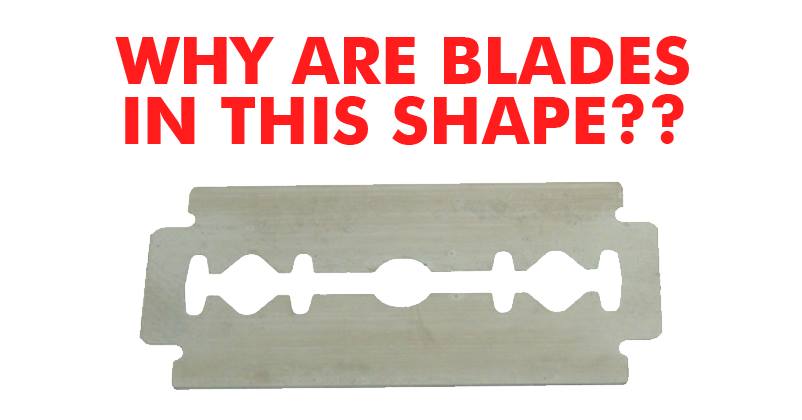 Many self proclaimed manly protagonists claims that it is the beard that defines a man. But what I believe is that its his nature towards people that really defines him. His nature to women, elderly people and children. Having a beard doesn’t really makes you a man. The growth of facial hair depends from person to person. Some people can develop it at an early age like 16-17 while some people still wait for it. Some people like beard, while some just can’t stand it. Earlier cavemen used sharp stones to shave off their beard. But we aren’t living in stone age anymore. We have razors and trimmers to shave our beard. But what makes a razor the thing for which it is known for ?. THE BLADE. A blade is very sharp. When I held it for the very first time, apart from being precautious of it’s sharpness, I had this one little thing boggling up in my mind. What is the matter with this weird shape in the middle of the blade ?

Back then, I was too small to even google up without crashing into any adult websites. So now, when I know how to browse on Incognito mode, here are some of the reasons behind such a peculiar shape of blade.

For understanding the concept, we need to go way back in 1904. The Gillette Company launched it’s first blade. It was a unique double-edge use and throw blade that was so thin that it was very flexible. In order to firmly fix the blade on the razor structure, it was required to fit it through screw mechanism. Three holes were punched on the blade while a threaded stem was developed on the razor cap along with two studs that were aligned with the three holes in the blade. And this is how the blade was successfully and firmly placed in the razor. It was just a simple blade with three holes on it. But the modern time blades are slightly different. So the reason of such a different outcome from the conventional blade was due to the cold patent fight between an inventor Henry J. Gaisman and Gillette Company. After the three hole blades were out in the market, Gillette had it patended for the next 25 years which hindered many company from producing such kind blades. After May 1921, when the patent was expired, many company started to produce blades.

Henry J. Gaisman founded Probak Corp. as a division of his AutoStrop Safety Razor Co. and started manufacturing blades. But there was a smart move. He created blades which would fit in Gillette’s razor. At the same time he also created razors which would not accept Gillette’s blades. The structural design of Probak’s razor was quite different as compared to Gillette’s razor.

The cap had a pair of depressions that accepted the variously shaped studs that were only on Probak’s guard. Also in order to bring in more complexity, the cap mounted corner blade-alignment pins that were nested into the depressions in the guard. In order to fit the blade, the blade had to have correctly placed openings to accept the protrusions and the corner pins.

This new design became a serious problem for Gillete Company and in order to tackle such challenges, they came up with NEW GILLETTE blades. The old three hole blades would not fit in the new NEW GILLETTE razor, but the new design and patented blade would still work in all the old Gillette razors.

And in order to bring up new combinations of blades and razors, the evolution of blades went on with change in designs. The patent fights went on and at last, the finally accepted blade design that would accept all the razor was prepared. Have a look.

Another reason for such engraving hole ( Not such a peculiar design ) onto blades can be by considering the fact that the first blade which was prepared was barely 0.20 mm thin which was made up of chrome steel. In order to maintain sharp edges for long time, it was heat treated by quenching and this heat treatment made the material hard and brittle. This led the material to break when someone tried to deform it even slightly. So the the engraving of hole was to provide flexibility without breaking. It gave stability with flexibility.

So this it it. The science behind the shapes of holes engraved on blades. If you have any extra relevant information, please share it with us in the comment section below.

Continue Reading
You may also like...
Related Topics:blade, how, middle, razor, shape, why