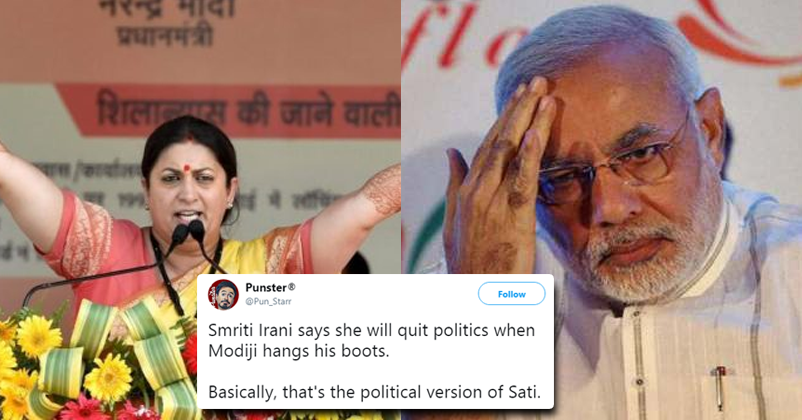 At the Words Count Festival 2019 in Pune, Union Minister Smriti Irani was speaking to the attendees when she said that she will leave politics the day PM Narendra Modi decides to retire.

When people asked her if she would ever become the pradhan sevak, she said ‘never.’ She said that she had been fortunate enough to work under charismatic leaders like Narendra Modi and Atul Bihari Vajpayee.

However, if Modi chose to retire or step down, she too would leave Indian politics as she did not wish to serve under anyone else. 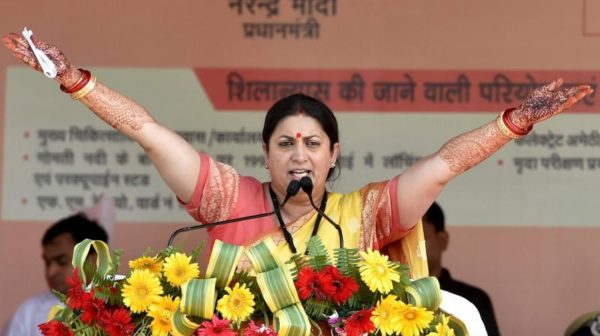 However, netizens had the funniest reactions to this news. Some pointed out how in 2004, Smriti Irani had promised to fast unto death until the then CM, Modi, resigned. Clearly, that did not happen and people are now finding it difficult to trust her.

Flashback to 2002, the same Smriti Irani said that she would go on an indefinite fast till Narendra Modi didn’t resign as Gujarat CM.
LOL. https://t.co/J2SVmto9e1

She also left studies when she found out Modiji didn't study much either.

Smriti Irani says she will quit politics when Modiji hangs his boots.

Smriti Irani provides an added incentive to vote out Modi. Two for the price of one. https://t.co/tjfWduTBdp

Will quit politics the day PM Modi hangs his boots": Smriti Irani..see what happened after that…😜👇🏻🤪😂👇🏻 pic.twitter.com/BViWdq4HF1

Then,
In 2004 December the same Smriti Irani threatened to "fast unto death" until then Gujarat CM modi resigned, blaming him for BJP's electoral losses

So, I do not take her seriously pic.twitter.com/tBrQvUTMBV

Another drama by @smritiirani who had also started Fast-unto-Death till Modi is not removed as Gujarat CM https://t.co/jE8gLAee5N

Dear India,
Let's get rid of these both fake degree holders at one shot!

Mamata Banerjee Sat On Dharna Against Modi Govt; Twitter Flooded With The Most Hilarious Memes
Modi Waves At Empty Dal Lake In Srinagar, People Say He Is Waving at ‘Imaginary Friends’.