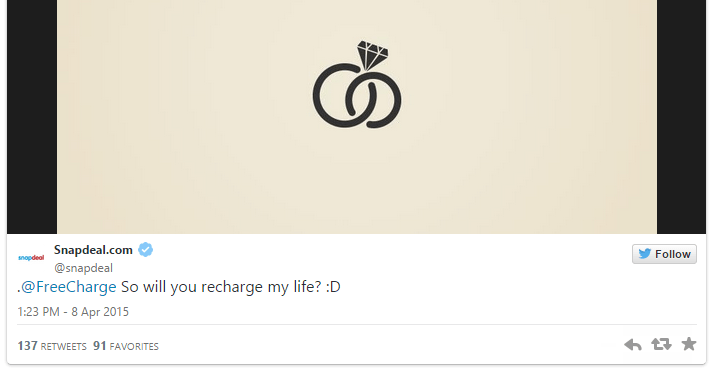 Snapdeal, India’s largest online shopping site and Freecharge, India’s largest mobile recharge site merged together into one big mobile commerce company. And to tell this news in media, both of them went on twitter and break the news in the most romantic way. Snapdeal proposed Freecharge and Freecharge said yes to the proposal and they got married. This acquisition costed more than 2800 crores to Snapdeal.

Snapdeal said Freecharge that he got something to tell her.

Freecharge asked Snapdeal that what it is?

Snapdeal proposed Freecharge if she will marry him. To which after a pause, Freecharge said yes.

And after that both Snapdeal and Freecharge got married and lived happily. And that is how my friends the #DillKiDeal was done. Happy ending!

Continue Reading
You may also like...
Related Topics:freecharge, Snapdeal

India Does Not Require Any Sport Other Than Cricket, At Least This Proves So
Bihar The Epitome For Cheaters & Bribe Givers. Dare Anyone Who Can Break This