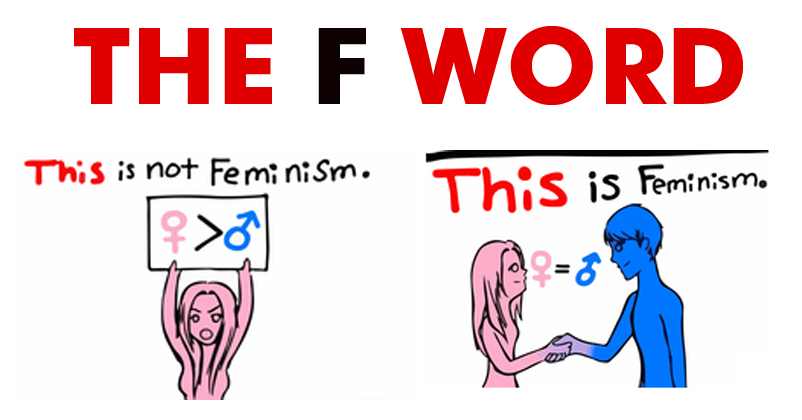 Recently I asked my mentor for an approval to write an article which includes ‘THE F WORD’. And Yes he was definitely scared of it.

No wonder it was the word – ‘Feminism’.

Now before somebody gets offended and write an open letter to me, let me just say this and I feel the need to say this because there are a lot people who don’t understand the actual meaning of ‘FEMINISM’. So for the benefit of these idiots, let me just say this. I AM A FEMINIST. Yes I do believe that Men and Women should have equal rights.

Now feminism is a good thing. A real need of the society ! !

Image Source
But there are some people who are very extreme with their approach and make people believe that there is terrorism in feminism. Today, people are even scared to use this word. Now let me help you with the word ‘Feminist’. Its positive to have feminists around us. Now we have seen a lot of people showing unnecessary aggression towards their approach on being a feminist. I like to tag such people as ‘FEMI-NARCISSIST’ or ‘FEMIN-ISIS’. Both of them are equally harmful for our society. These people are the ones who are giving a wrong image to the word ‘FEMINISM’ Now you might be having some trouble regarding how to distinguish a Feminist from a Feminarcissist or Feminisis. Let me help you with that by explaining it in one single sentence.

A Feminist will be glad to know that the writer of this article is a ‘GUY’ who is trying to clear some myths about Feminism whereas a Feminarcissist or Feminisis will freak out once they get to know about my gender and will bash me up for even daring to write something on Feminism which they believe only belong to women. Although I agree that the word FEMI-NARCISSIST is quite offensive, TO HITLER. He killed both men and women, he didn’t discriminate. We have to give credit where credit is due. RIGHT ? ? Image Source
The whole ideology of Feminism is laid upon the word ‘EQUALITY’. You can never consider a person superior than the other while you talk about equality. And this is certainly not Feminism. Feminism is not about hating Men. That’s ‘Misandry’ ! !

Another misconception that people have is that only Women are eligible to be Feminist.
Feminism is all about supporting and believing in Women’s Right for Equality. You don’t need to be a woman for supporting or believing in ideologies ! ! Right ? Now that doesn’t mean that Feminist Men are against their own gender or are gays. No, they just believe in the idea of equality. And supporting women for their strong moral values and beliefs doesn’t make you a less of a man, instead ‘Only Real Men Support Women’ Many people also believe that Feminists think all men are rapists. Perhaps this argument is linked to Schrödinger’s Rapist, a concept which describes a world of fear, where a woman assumes that every men she meets is a potential rapist. As the saying goes, ‘ALL MEN ARE NOT THE SAME’, I don’t find another reason to explain you more about it. Some people believe that all Feminists want to create a matriarchal society. The whole idea about fighting against patriarchy is not because to tear it down and host the flag of matriarchy but rather create a new world where words like patriarchy and matriarchy don’t exist.

And now I hope that I was able to clear some of your doubts which you had earlier for Feminism. If you still feel that feminism is an unnecessary entity in our society, please put your views forward in the comment section below so that the rest of the members can discuss about it with an open and free mind.

Remember ! ! Try to Become a Feminist not a FEMI-NARCISSIST or FEMIN-ISIS.

Continue Reading
You may also like...
Related Topics:feminarcist, feminisis, feminism, feminist, misconceptions, Some Common Misconception About Feminism That We Have And Need To Stop Believing

This Is The Reason Why Fish Don’t Die When Lightning Strikes The Sea
This Uber Cab Driver Threatened To Rape Her, What She Did Next Was Simply AMAZING ! !