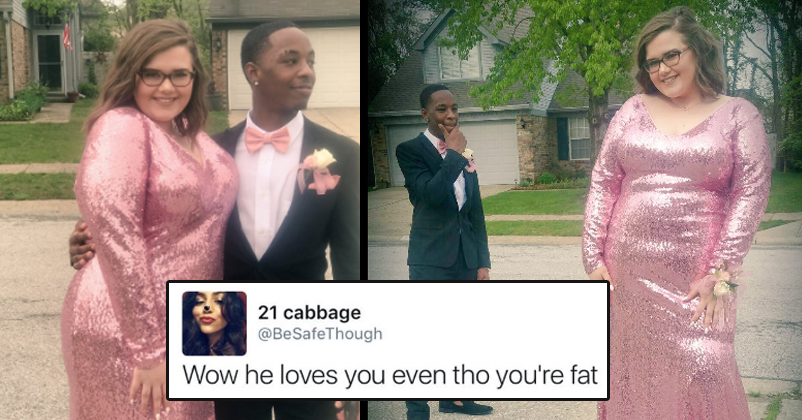 What is beauty? It is something that suits our eye or we like to see again and again. When a person is beautiful we want to be in their company as it gives us a sense of satisfaction. But is it necessary that if I find something beautiful, you should think same about it? Beauty is subjective. right? Maybe a person is so special that others can’t see the beauty. Maybe the beauty is in their heart or thoughts and sometimes it’s more than enough. It should be appreciated not judged.

The whole “Theory of beauty” that we just wrote here, was explained by a boy when someone called her girlfriend fat. The difference was that he was able to explain it in just one line. LOL.

So what happened was this couple Tre Booker and Madison decided to share the candid pictures on Twitter they clicked at Prom Party. Can’t get over the clicks; But with all the RT’s there comes a lot of judgement and mean comments on Twitter. Same thing happened with the girl as she was called fat by a Random Twitter User.

This is what the girl tweeted –

Prom with the loml 💗 pic.twitter.com/yiYHfQjWo4

That random user could’ve just ignored it, but decided to spoil the fun

Don't see how people can be rude to people they don't even know pic.twitter.com/wx7cu7OGgp

Here’s the screenshot if you aren’t able to load the tweet; the message was, “Wow he loves you even tho you’re fat 🙁 mbn.” But the best reply was by her boyfriend. Here’s what he tweeted

“Your not fat baby ?God made you just for me . Your perfect.”

This reply is what every GF needs; even though people were trolling her on Twitter, her BF came to her rescue and expressed how much he loves her. For him, looks aren’t important, but inner beauty is.

However there are indeed some genuine people on Twitter. This is what they wrote –

WHAT THE ACTUALY HELL DUDE you are beautiful. you looked amazing tonight. you are 10x more beautiful than that person ever will be

ur beautiful, and u slayed in that dress girl. and ur hair? poppin. ur skin? poppin. y'all really served looks w that pink. 💕

You look absolutely stunning my love 💕

You guys are so beautiful and don't let the sad people of society ever take away those beautiful smiles. Hope you guys enjoyed your night. ❤

Faith in the Humans on Twitter restored. Right? We loved the way people made her feel good about herself and on top of that, her boyfriend’s message was really heartwarming.

Politicians & Journalists Are Loving Supreme Court’s Decision On Nirbhaya Case! Check Tweets!
This Pic Of The Baby Is Going Viral! You’ll Be Surprised To See The Thing He’s Holding