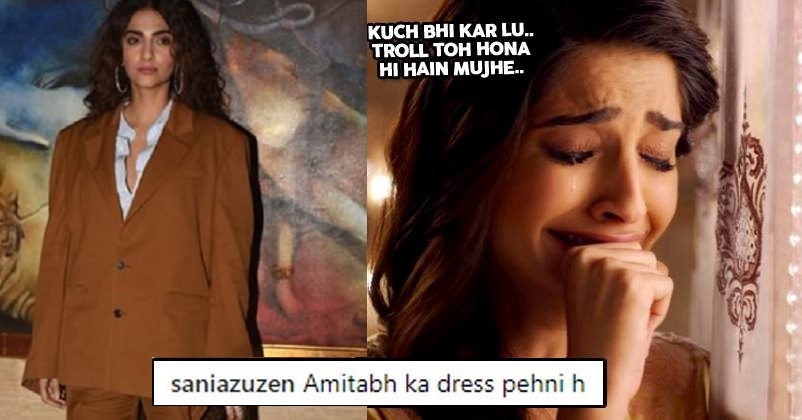 Celebrities often get trolled on social media for their dressing sense and the latest target of trollers became Sonam Kapoor who is popularly called the fashionista of Bollywood.

Recently Sonam was spotted in a brown over-sized pantsuit and while there was no problem with her pants, it was the coat that brought all the criticism and trolling on the part of the actress.

It was the 3rd edition of Jio MAMI’s Word to Screen Market welcome dinner and although people praised her curls, they found her coat a fashion disaster or rather a dirty spot in the name of fashion.

Take a look at her dress:

Netizens didn’t like her dress at all and trolled Sonam like never before and said that she has borrowed this suit from her father Anil Kapoor or B-Town megastar Amitabh Bachchan. They also called her a cartoon, gutter mice and worse-dressed than a maid.

Check out some of the selected comments:

Well sometimes, trollers mock a celebrity just to gain attention but many will agree that this time, Sonam did a blunder that has raised a question mark on her image as a fashion icon.

What do you have to say about Sonam’s dress? Let us know your views.

Varun Loved A Meme On Anushka So Funny That He Couldn’t Stop Himself From Sharing. Even She Replied
8 Things Which Make Stree Different From Other Horror Movies In Bollywood