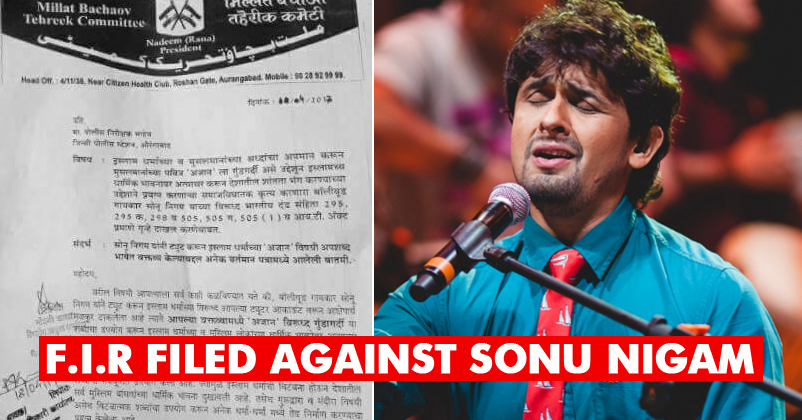 Sonu Nigam is in the news for all the wrong reasons this time. The most favorite singer of the nation is facing flak for his recent Twitter rant against the morning Azaan.

Well, Sonu Nigam, in general, tried raising concern over the use of loudspeakers in mosque and temples.

Now there has been an FIR lodged against the singer in Aurangabad district of Maharashtra. The official copy of the same is released.

Check out the copy of the FIR: Meanwhile, not just a FIR there is fatwa issued against Sonu Nigam by the Maulavi and whoever will shave his head will be rewarded 10 Lakh rupees.

So Sonu Nigam took a sly dig and wrote on Twitter: Today at 2 pm, Aalim will come to my place, and shave my head. Keep your 10 lakhs ready Maulavi. (Aalim Hakim is the celebrity hairdresser)

We don’t know how Sonu Nigam will react to this. We hope that things resolve soon for the singer. We believe that no other religion is bigger than humanity, let us all spread love and no hate.

What do you guys think of this action taken against Sonu Nigam? Do let us know in the comments section.

Bollywood Celebrities React To Sonu Nigam Controversy! Check Out How They Reacted!
Sunil Grover And Ali Asgar Team Up For This Reality Show! They Won’t Return To TKSS Now?