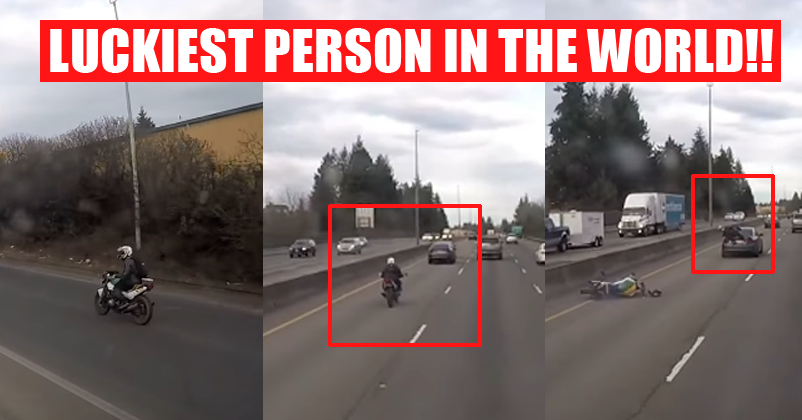 Accidents are something that people don’t really expect in their life. It’s like a surprise, a bad one though. The worst thing about it is that it can happen anywhere and at any time. A video on Youtube is now trending where a motorcyclist narrowly escapes death when his bike crashes to the backside of the car.

The video was shot in Washington State Highway that was posted by Brian Becton on Youtube. The exact location was on Interstate 5 in Tumwater.

So what really happened back there? Here is the scenario. A car was relatively traveling at a much higher rate that eventually led it to apply immediate brakes because of the slow moving car in front of it. However, the motorcyclist behind the fast car couldn’t adjust the parameters like speed and distance in appropriate time and hence his bike crashed on the back of the car, i.e the truck.

At such moments, when speed is relatively high, the chance of the survival of a person is usually at its lowest. However, it was the physics and the luck that saved him. Soon after the collision, he popped up at the trunk of the car instead of crashing down on road. However, the driver of the car didn’t realize that there was someone at the back of his car until the motorcyclist knocked onto the rear window of the car which made the driver stop the car.

The motorcyclist was visibly seen in anger and frustrated, however, fortunately, he didn’t get any serious injuries and was standing on his feet. Watch the video here.

So what do you think about this video? Don’t you think that it’s better to slow down in your life than just running fast to your graveyard. Please share your opinion in the comment section below.

Continue Reading
You may also like...
Related Topics:Car, motocyclist accident