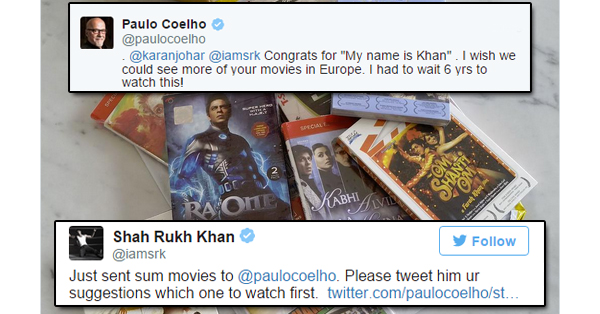 What can better than a gift from Shahrukh Khan himself on a Monday Morning? . Be it ordinary people like us or the most established personalities everybody is head over heel in love with him. Recently, Paulo Coelho watched My Name is Khan starring Shahrukh Khan and was bowled over the superb class of acting that SRK did. Paulo Coelho, poured in some generous amount of compliments after watching My Name is Khan. The fans went berserk over this! Obviously, every true blue SRK fan would have.

But what is even sweeter is the fact that SRK actually gifted him a bunch of movie DVD’s, as a Monday Morning Gift. And, Mr. Coelho got confused as where to start with, when SRK showed a really humble and sweet gesture and suggested selection as per his mood! Now this has just made our day and I am sure, yours too! <3

After all, ALL HAIL THE KING! 🙂

Pour in your love for SRK in the comment box below!