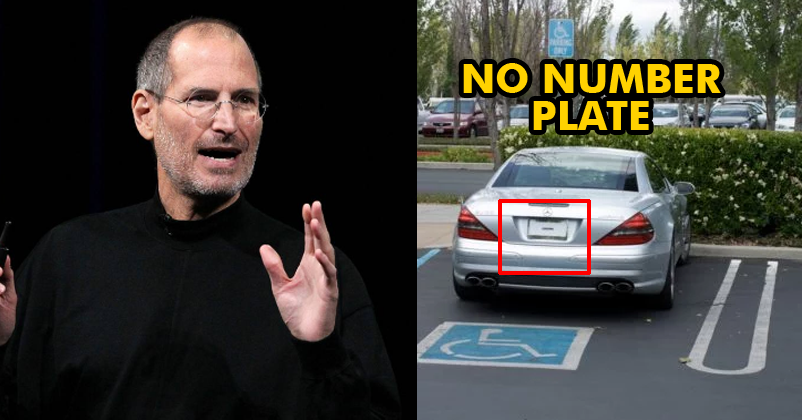 Steve Jobs was the man who broke the traditional outlook of the technology industry and created a brand new market in itself. His ideas and innovations set the benchmark of how a product should be like. His company, particularly ‘Apple’ shattered all the records and broke into many top positions after the launch of its new product – iPhone. However, apart from breaking records, Steve Jobs also did something that is still considered as ‘breaking the law’. No matter how big billion dollar company he had built, he lived his life as a simple man (as per American standards). He lived in a modest house in California, had a silver Mercedes SL55 AMG and everything that a simple man could have hoped for. But this simple guy outclassed the state police by his sheer smartness. He drove his car to his office without any number plate. Wondering how? Read further. Was he too rich to throw away a little of his money for a small sum of fines? Or was he considered above the law who had the right to drive numberless number plate car on the streets of California? The answer is that Steve Jobs was a very clever man. He had somehow found a loophole in the ‘California Vehicle Laws’ and that is how he had managed to drive a numberless number plate car.

According to the ‘California Vehicle Laws’, any person who owned a brand new car had a maximum of six months to affix the issued number plate to the vehicle. So Steve Jobs made an arrangement with the leasing company where he would always change cars during every sixth month of the lease. He exchanged one silver Mercedes SL55 AMG for another identical one. This made him use the cars which were not older than 6 months. Hence, he never really required to use any number plate for his car.

But the question that still remains in every person’s mind is that why he never wanted to use a car having a number plate on it. Well according to Walter Isaacson, Steve Jobs didn’t want anyone to track him through his number plate and that’s the reason why he prevented the use of it. So what do you think about it? Please share your views and opinions in the comment section below.

Finally Nokia Reveals The New Design Of Nokia 3310 & It’s AMAZING! You’ll Feel Like Buying It NOW!
She Wanted Modi’s “Shiva Stole” What PM Modi Did Next Will Amaze You! Heartwarming Incident!