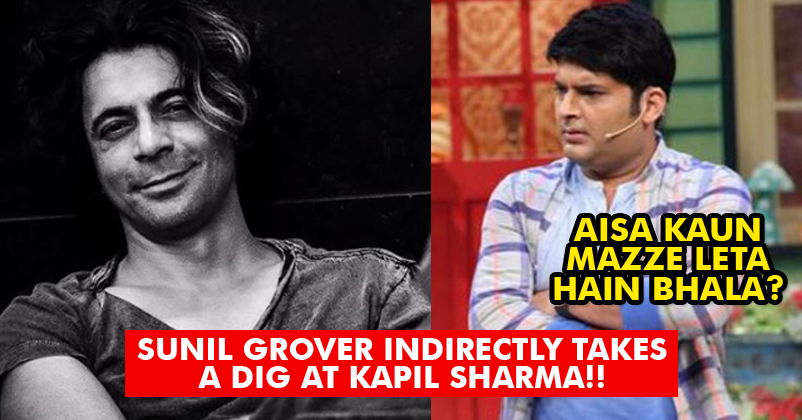 Kapil Sharma and Sunil Grover’s fight became the talk of the town from past few days. The infamous fight has affected the show ratings of The Kapil Sharma Show also.

Though things have slightly calmed down, however, the recent post on Sunil Grover’s Instagram is a subtle message for Kapil Sharma. We aren’t saying it but the comparison of his post to the fight is something that we cannot escape either. The message along with his photo sums up an apt reply to Kapil for his insensitive act during the fight in the flight.

As we all know Kapil Sharma was in drunk state and as he had no control over his actions, he indulged in a verbal and physical fight with his team members.

In the drunken state, he even went to an extent of slapping and throwing his shoes on Sunil Grover. We don’t know how true the events are but the recent Instagram post can make a better proof for confirmation. Some of the fans even reacted and asked Sunil whether the message is for Kapil or not:

Now this cryptic message seems like an indirect message for Kapil. Though we don’t want to create an opinion, still we cannot ignore the relevance of the caption, the photo, and the fight.

We hope we get to see some positive news real soon. What do you guys feel?

Ranveer Wants To Be Arjun Kapoor’s “Half Girlfriend”! This Twitter Chat Is Too Romantic To Miss
Brock Lesnar Overtakes John Cena, Check Out The Top 10 Highest Paid WWE Wrestlers As Per Forbes!