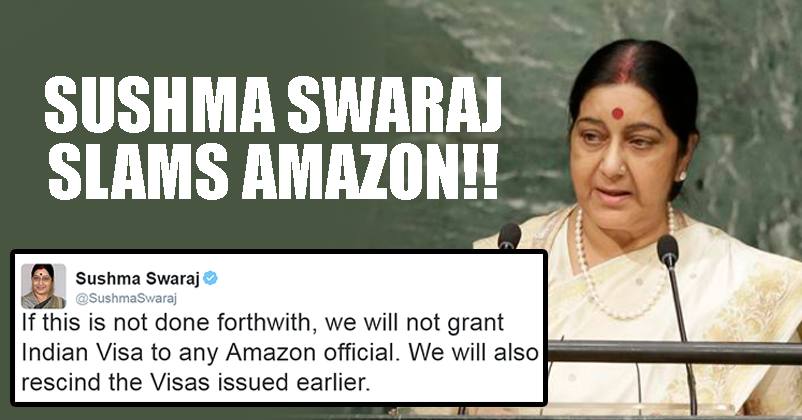 The pride of seeing my country’s flag waving at high heights cannot be matched with any other worldly joy. The flag of a country gives its citizens THE RECOGNITION about his nationality. And anything that gives us recognition in our life, should always be respected by keeping it at the most respectable position.

Recently, our foreign minister, Sushma Swaraj received a picture/screenshot of the website – AMAZON (CANADA) where they were selling the doormats on which the flag of our country was printed on. As a citizen of our country, like many millions, she was also offended by this act of negligence, immaturity and irresponsibility committed by the AMAZON OFFICIALS and hence, she took a firm stand on this and confronted them. At first, she brought the matter under the notice of the ‘Indian High Commission in Canada’.

Indian High Commission in Canada : This is unacceptable. Please take this up with Amazon at the highest level. https://t.co/L4yI3gLk3h

After that, she posted a series of tweets where she made her stand clear. Have a look at them.

Amazon must tender unconditional apology. They must withdraw all products insulting our national flag immediately. /1

We will not grant VISA to Amazon Officials

If this is not done forthwith, we will not grant Indian Visa to any Amazon official. We will also rescind the Visas issued earlier.

This was indeed a strong and a bold move by Sushma Swaraj which was the need of the hour. After her tweets, many people have now started a campaign for boycotting the use of AMAZON products for hurting their sentiments. As an observant writer, this is indeed a beautiful sight to watch where people are actually deciding to boycott something for a worthy reason. However, it would have been nice if they had done the same when various politicians wore the national flag around their neck and looted billions of money in the form of corruption.

Food Meant For Jawans Is Sold At 50% Lesser Price Outside! Shocking But True!
Jio All Set To Destroy The Smartphone Market! Launching The Cheapest 4G Smartphones!