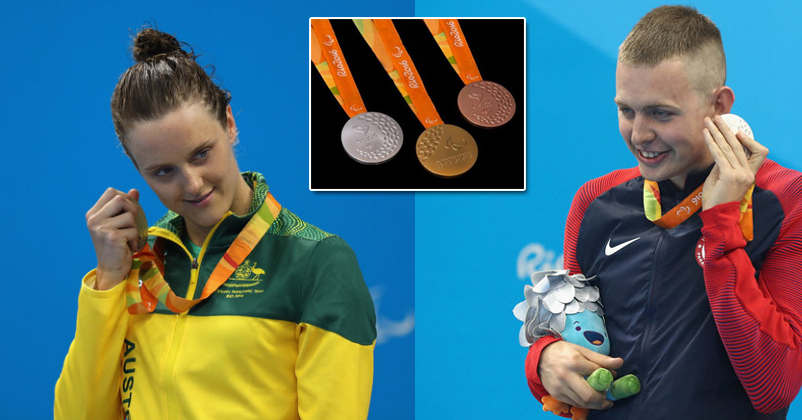 We know that it has been a tradition for the athletes to bite their medals when awarded on the podium, but at the Rio Paralympics there’s a new tradition — shaking the medals, which the entire world has been talking about. The Olympic winners bite their medals to celebrate their victory and we are seeing the Paralympians shaking their medals after their big win. This is the newest tradition in Paralympics.

The 2,500 medals that will be handed to the winners of the various events of the Paralympics have a device inside that uses tiny steel balls to make a distinctive sound when they are shaken. This will help the visually impaired athletes to identify the color of the medals. A bronze medal has 16 steel balls and it makes the lowest sound. A silver medal has 20 balls, it makes sound louder than bronze, and a gold medal has 28 balls, it produces the loudest noise. But that’s not all. All the medals also have “Rio 2016 Paralympic Games” engraved on them in braille which will help the visually impaired to read. Isn’t that amazing? That’s really thoughtful!

“We wanted to begin a new way to celebrate on the podium. Usually [athletes] bite the medal, and now we want them to make this movement.”

Tania Martins, the brand manager for the 2016 Summer Games, calls this creative idea ‘the sound of victory’. This would allow the athletes to hear their ‘sound of victory’ and would make their celebration more amazing. The Head of medal-making Victor Hugo Berbert said,

“We wanted to not just be able to show the medal, but for those who have a visual or sensory impairment to be able to feel it not just by touching it, not just with the braille that is on it, but with its sound.” So guys isn’t that amazing? So now you know The Reason Why Paralympians Are Shaking Their Medals! Share this with your friends!

Virender Sehwag Trolls This Fan In The Most Epic Way!
Ashwin Shuts Down Pakistan Fans Who Made Fun Of India’s Paralympics Victory!