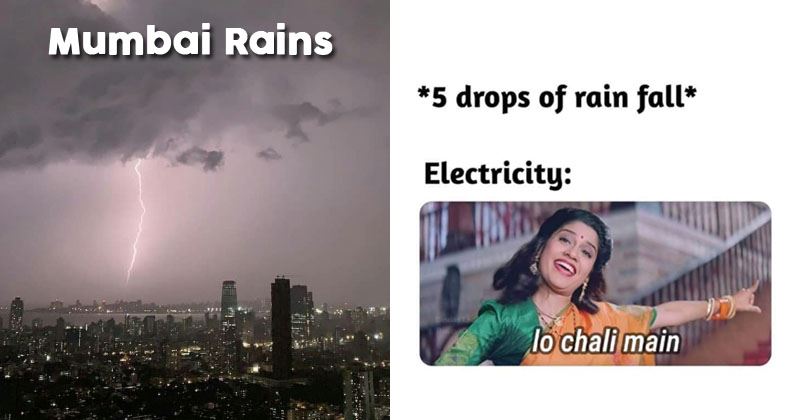 Rainfalls are back in Mumbai to show the authority the real face of the Drainage System they’re proud about. Two things are very much common with monsoon hitting MUMBAI .

However, heavy rainfall and thunderstorm brought a much-needed break from the scorching heat to inhabitants of Mumbai on Monday in the evening. Surprise showers affected the air, road and rail traffic in the city.

Twitter is busy celebrating #Mumbairains with hilarious memes and trolls:

#MumbaiRains is like arranged marriage, everyone celebrating on the 1st day, and then…

And then there are people like us who carry plastic sheets to sit on the window seat. Lol

Pic 1: Mumbaikars on arrival of monsoon

Mumbaikars beware. Bunty will be looking for his chhatri.#MumbaiRains

Sitting in Delhi and watching videos of the #MumbaiRains enviously.

When It Rains I Become Happy By Default, No Matter How Good Or Bad My Day Has Been 🙃

Mumbaikars on how BMC has made arrangements to tackle this years water logging situation !!!

My grandmother actually went down to dance in the first rain and came up all giddy. This is how excited I wanna be about everything in life! #MumbaiRains

Be safe cause its Mumbai Rains!

Continue Reading
You may also like...
Related Topics:Mumbai, Mumbai Rains