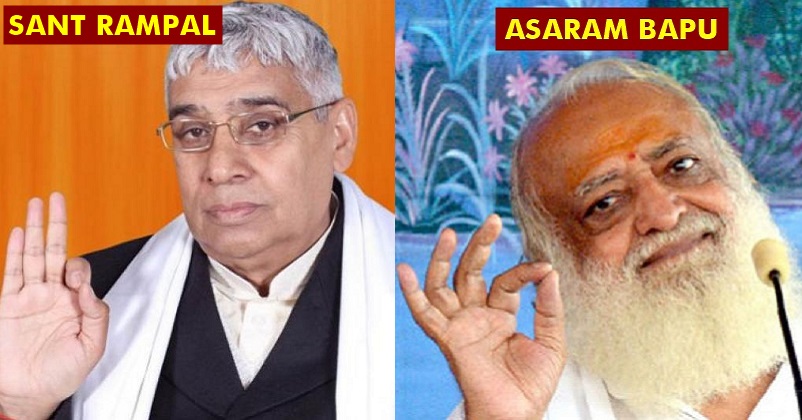 There are several controversial Godmen who show off fake “Money” and “Power”; however, one must remember that many of them are not at all real and are totally “Bogus”. They have everything except powers, be it Rolls Royce, be it swiss watches or be it branded accessories. However, their popularity is immense and they have a huge fan following. Today, we are here with the list of 10 such Godmen, which are always in news for all wrong reasons. This man calls himself Ichchadhari Sant Swami Bhimanand Ji Maharaj and claims to be the disciple of Sai Baba. He earlier used to work as a security guard in a five-star hotel in Nehru Place, Delhi. Then, he started working for a massage parlour at Lajpat Nagar. He came into headlines when he was first arrested in Lajpat Nagar in 1997 for running a prostitution racket. After getting released from Jail, he changed his occupation and called himself a disciple of Sai Baba In the past 12 years, he have managed assets worth crores. He claimed to have performed rituals at a Prime Minister’s residence and was nabbed only when he fell out of favour with those in power. The Supreme Court found him guilty of burying his wife Shakereh alive in their Bangalore house to usurp her massive property. He was given the punishment of Life Imprisonment. Swami Premananda of Tiruchirapally ashram in Tamil Nadu was accused of raping 13 women.  He was accused of having killed a Sri Lankan male, Ravi who had been living in the Ashram for a short period of time. Medical tests confirmed that he raped the 13 girls. Swami Premananda and six others were arrested and imprisoned in November 1994.

He was sentenced to two consecutive life sentences in 1997 by the Sessions Court in Pudukkottai, the Chennai High Court (in 2002), and then the Supreme Court (in 2005) confirmed the Judgment. Premananda died on 21 February 2011 due to illness. Nemi Chand Jain, popularly known as Chandraswami, claimed to be a psychic, an astrologer and a faith healer. Chandraswami was attracted to the study of Tantra from an early age.

His knowledge of their private lives and business dealings made him one of the country’s top power brokers. The MC Jain commission report in 1998 dedicated an entire volume to his alleged involvement in Rajiv Gandhi’s assassination; an income-tax raid on his ashram reportedly uncovered original drafts of payments totaling $11 million to arms dealer, Adnan Khashoggi. CBI has lodged a cheating case and a case for his involvement in the conspiracy to assassinate former Prime Minister Rajiv Gandhi in 1996. He came into news in 2014 as about of his 12k followers, including women and children, tried to immolate themselves at his ashram at Hisar. The 63-year-old guru is out on bail in a 2006 case when his supporters opened fire on villagers, killing one and injuring several others in Rohtak. He is also facing contempt charges.

Nirmal Baba (Nirmaljit Singh Nirula), was born in 1952 in Samana, India, near Patiala in Punjab.
He claims to have attained Nirvana in a Jharkhand forest in the 1980s. He then cut his Sikh hair, shaved off his beard and adopted the name, Nirmal Baba.

The spiritual leader has been exposed with Rs 235 crore. After the tremendous pressure, which has been mounted on him, Nirmal Baba finally accepted that the total turnover of his Nirmal Darbar is almost Rs 235 crore.

There have also been several cases against him for alleged fraud and cheating. Narayan Sai is the 41-year-old son of spiritual leader Asaram Bapu. Sai was charged with molestation when a Surat-based woman lodged an FIR against him accusing him of exploitation and repeated rape between 2002 and 2005. He had further admitted that he had a physical relationship with eight other women followers in different parts of the country.

Sai was also accused of bribing the local authorities holding him in custody in an attempt to have the case of sexual abuse against him weakened or dismissed.

The Gujarat Police estimate that Narayan Sai has properties and investments worth more than Rs. 5,000 crore. Everyone of us would be knowing him. His ashram, located on the banks of the Sabarmati in Ahmedabad, is visited by devotees for prayers, yoga and meditation.

He was in news for the Mysterious death of two boys studying in his ashram’s gurukul.
The boys went missing on July 4, 2008. Their mutilated bodies were recovered from the riverbed on July 5. With allegations of black magic doing the rounds, the city saw massive protests and demands of a CBI probe. The latest addition to this list is Gurmeet Ram Rahim. Dera Sacha Sauda chief Baba Gurmeet Ram Rahim Singh was charged by CBI in a rape case. He was charged with sexually assaulting women followers of the Dera at the sect’s Sirsa-based headquarters. The CBI is also investigating two more charges against him for his alleged involvement in the murder conspiracy against Dera manager Ranjit Singh and a Sirsa-based journalist, Ram Chander Chatterpatti.

What are your views on these ‘fake’ Godmen?? Do tell us in comments.

Continue Reading
You may also like...
Related Topics:Controversial Godmen

11 Myths About The Earth Which We Believe From Our Childhood!
10 Cultural Differences A North Indian Notices When He Visits South India!