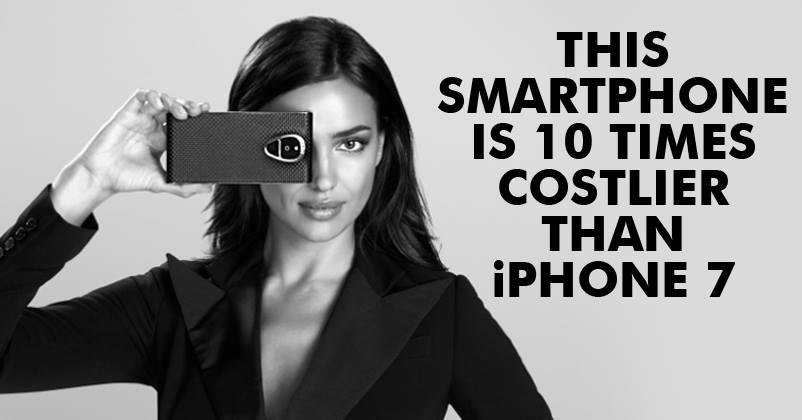 Apart from all the high-end specifications and software compatibilization of iPhone 7 along with its hardware, the reason why an iPhone is considered as the iPHONE is because of its whopping high price. Buying a phone worth for 70-80 thousand rupees in India is indeed a big thing. At such price, one can afford a good BIKE.

However, today we bring to you a phone whose worth is almost 10 times the price of iPhone 7 Plus or in short almost equivalent to a luxury car in India. The phone’s name is ‘Solarin’. A phone which is now setting a new benchmark in terms of so called ‘SOCIAL STATUS’, because in India, it is sadly the price of a phone which makes it worth noticing for, instead of its specifications. The price of this Solarin phone is set at insane $14,000 which is roughly around 9.3 Lakhs rupees. And the fun fact is that it’s an ANDROID PHONE. Many people defend the high pricing of iPhone due to the quality and experience provided by its IOS which is to some extent quite legit, but owning a 9.3 Lakhs rupees phone powered by a mere Android version is not the kind of thing I would ever like to defend. And yes, these prices are exclusive of TAXES, if you were wondering about that ! However, the explanation given by this Israeli firm, Sirin Labs for the high pricing of its Solarin phone is due to the provision of “military grade” security powered by chip-to-chip 2560bit encryption system. Apart from these high-end technical specifications which none of us would be understanding, let me come down to the easy thing. It is 5.5 inch Android runs on Qualcomm’s Snapdragon 810 processor with X10 LTE (it’s fast but not the latest) with a 23.8-megapixel back camera. The phone also boasts of an IPS LED 2K screen, three “bass boosted” speakers and can transfer data at lightning speeds of 4.6 GB per second. It powers a 4,000mAh battery will make sure your phone lasts as long as you want it to. 4GB of RAM makes it fast and 128 GB provides for enough space. However, it is non-expandable and does not have a second SIM slot. To make it all classy, there’s a large sapphire glass cover for the camera lens and flash and a fingerprint sensor. Pros- The data file transfer speed is indeed pretty sublime, along with the 2K resolution. The back camera does look great. The new military grade security is something innovative. The 4GB RAM should make this phone work in a better way.

Cons – The battery provided is just 4000mah, which in a general way might be good for other phones. But since this phone has a 5.5 inch big 2K display resolution, it will easily juice out the battery life by throwing out the best pixels. Along with that, the high processing speed (transfer of big files) will also make a big impact on its battery life, thus making it choke for more power. Is it really worth buying this phone ? Well, I will leave this question up to you and let me know about your opinion in the comment section below.

The Speed Of Jio Has Gone Down Considerably! Here Are The Proofs Of The Same!
This Is What India’s Potential Smart City In Gujarat Promise, AWESOMENESS OVERLOADED ! !