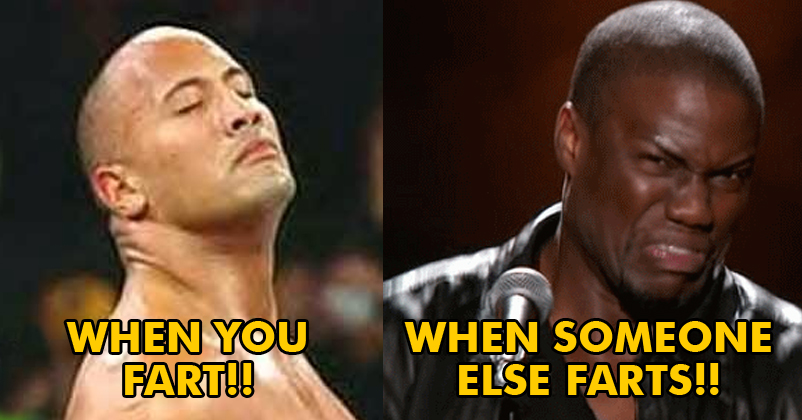 Sounds of Farts are funny, but you dare not say the same for their smells. Actually let me be a bit hypocrite and exempt myself from this restriction. Okay so now, it’s just your fart.

Perhaps it’s the last night’s ‘MOOLI KA PARATHA’ or your recent ‘Rajma Chawal’. While it is on our plate it does look nice with various amazing smells but once you start puffing them out in gases, story is something different. It is not a pleasant smell but quite tolerable for yourself. In the same way, someone else’s fart is tolerable to them but not for you.

Well, now I won’t say that I conducted a survey of smelling Farts of 100 candidates and then picking up the data from that. The data of these assumptions have been taken out from various websites and various discussion threads.

1. It has something to do with our defense mechanism. Just like when we observe a foreign object hitting at us, we start acting defensive towards it. As the way, when a foreign smell, like smell of chemicals, rotten substance, decay of dead animals starts coming down to our nasal cavities, we sense a fear, a fear of danger. Because something which smells bad is indeed considered bad for our health.

Our own farts, are scented by our own internal bacteria and microorganisms which we have eaten. So our brain recognizes them as “safe” and therefor they don’t smell “bad”. Other people’s farts are scented by unknown bacteria and food, so they smell foreign, and depending on what your brain recognize, they can either be tolerable (mostly recognized) or repulsive (unrecognized, and potentially dangerous signaling nearby feces).

2. Now this point can be a bit gross for some of you, although it’s quite normal. The time we are born i:e just after the delivery, the smell of our Farts are determined just at that moment. It is because once we get expelled out of mother’s birth canal, we pick up bacteria from our mother’s vagina. Then these bacterias get settled on your stomach and remains there for the rest of your life. According to a research there is 1.3 kg of bacteria in our digestive system. So all these chunks of bacteria creates a unique identity which is quite familiar to our nervous system and hence it doesn’t smell that gross. Hence it is quite tolerable, but since your friend’s body’s bacteria are very foreign and unknown to you, you body’s nervous system does not accept its presence and hence makes a gross feeling inside you. Our farts contain pheromones that are unique to us and hence helps us tolerate the smell. Many people don’t even have to tolerate because according to some of them, they like the smell.

3. According to another unconfirmed report, the smell of fart has a relation with the relative reality that our brain anticipates i:e ANTERIOR CINGULATE CORTEX. Our brain also plays a vital role. When we fart, we know the fact that within no time, its going to smell. So in short, our brain has already anticipated it and is prepared for it. However when someone else fart, we are not aware of it unless we start smelling something awful and that is the gross smell of the fart just because of our brain wasn’t anticipating for it and it was smashed by all the negative
stimulus.

So well that pretty much sums up everything and the science behind the explanation. If you have any more information regarding this subject, please feel comfortable to share it with our readers in the comment section below ! !

How Is Marijuana Banned In A Country Where Lord Shiva Is Preached, While Toxic Alcohols And Tobacco Are On Sales
Why Do Tears Fall Off After We End Up Laughing So Hard