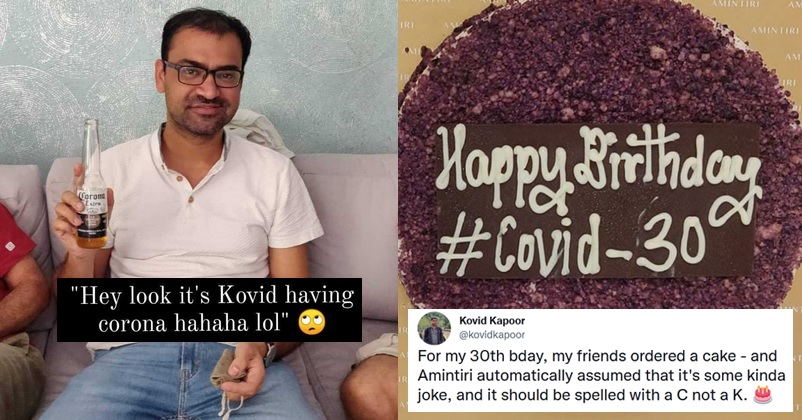 The COVID-19 pandemic has made our lives hell for the last two years and it won’t be wrong to say that we all are very much scared of the word ‘COVID’ but there is one person who is facing many hilarious situations because of his name which is quite similar to the name of this virus. 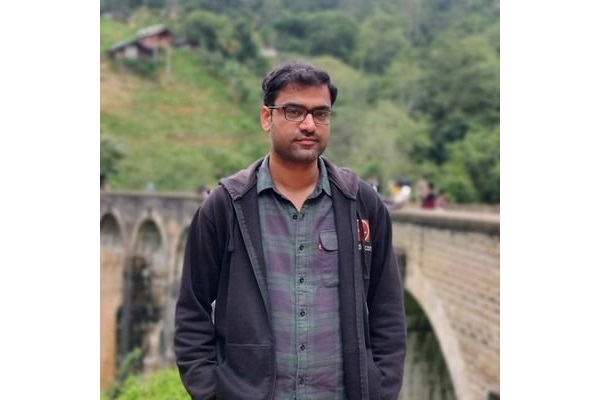 Kovid Kapoor has become a very popular person in the recent past, obviously for his name, and he has gained many followers as well on the social media networks. Kovid, a co-founder of Holidify.com, is an alumnus of IIT-Bombay and his tagline reads, “My name is Kovid and I’m not a virus”. 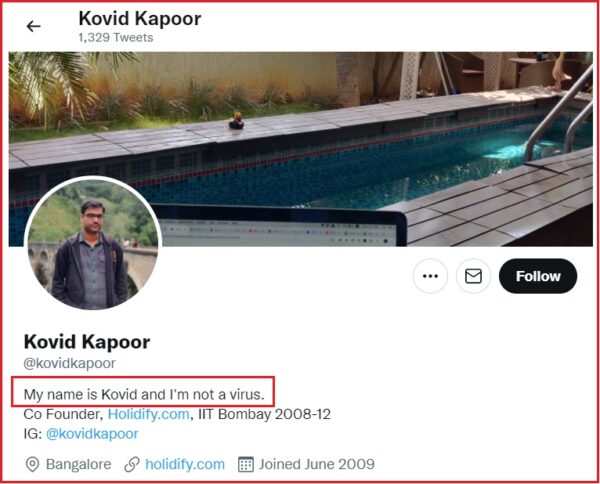 Recently, Kovid Kapoor took to the micro-blogging site Twitter and revealed that a number of people were left amused after knowing his name when he went on a foreign trip, adding that future foreign trips will be fun.

Went outside India for the first time since COVID and got a bunch of people amused by my name. 😂

Future foreign trips are going to be fun!

So! Since the last thread got sooo viral – and I feel like a mini-celeb now – thought I'll share a bunch of funny names related incidents.

He also informed his followers that the meaning of his name is scholar/learned and it comes in the Hindu religious book, “Hanuman Chalisa” which is read for the purpose of offering prayers to Hindu Lord Hanuman.

He also wrote that the pronunciation of his name is different from COVID as in his name, D sounds in a soft manner, not hard like in the name of the virus; it is pronounced as ‘कोविद’ and not as ‘कोविड’.

I'm quite used to really enunciate my name, stressing that it's a soft D and not a hard D. And to quickly whip out my PAN card from my wallet, just to prove that it REALLY is my name. 😂

For those on this thread, wondering what my name actually means – it means scholar / learned.
Comes in the Hanumaan Chaleesa.

Also, it's pronounced as कोविद not कोविड 😅

In response to his tweet, another user revealed that the name of his society is Corona Optus and this could be searched on the search engine Google as well.

My society name is Corona Optus, in Gurgaon. It starts with C even 😀😀

And you can google it also 🤪

Corona was an existing word. Problem is with scientist who used it for name virus and diseases.

On the other hand, another user gave a detailed meaning of Kovid:

Exact meaning would be someone who is learned in Vedas. Very nice name.

Kovid also revealed that on his 30th birthday, his friends ordered a cake for him but the baker committed a mistake of writing COVID-30 instead of KOVID-30.

For my 30th bday, my friends ordered a cake – and Amintiri automatically assumed that it's some kinda joke, and it should be spelled with a C not a K. 🎂 pic.twitter.com/3jrySteSbC

Kovid also posted a photo of himself holding a bottle of Corona beer which is another name for the virus.

The Kovid + Corona joke that noone ever seems to stop talking about. 🍺 pic.twitter.com/cJ5VsHzhD0

He also revealed that when he went to Starbucks for having coffee, the person who gave him coffee told his name to everyone and people present over there laughed out loud.

At Starbucks, the guy handing me the coffee pointed out the name to everyone else and they burst out laughing – I mostly use a fake name now. ☕️ pic.twitter.com/79STYv2uG6

If this was not enough, even Google thought that Kovid misspelled his name,

When Google though that I misspelled my name, in my own Gmail search 👨‍💻 pic.twitter.com/sNtZs3GmUb

Here are some more funny situations that were revealed by Kovid Kapoor and it is something that he will experience his whole life,

A Zoomcar customer care guy called me, to process some pending refund, and told me that he had been laughing in the room with the other customer care folks before the call. 😂

This is how Twitter users reacted to his name and the funny situation:

So how does it go…
Hey Kovid , please to meet you 😛

🔥😂😂😂 I can imagine an announcement on an airport. This is the final call for Mr Kovid kindly board your flight before you miss it 😂😂😂

So, when are you going to leave finally?😅😅 No offense though. I really wanna go to college again!😄

Well, let’s hope that Kovid has a great life but COVID goes away from our lives as soon as possible. Till then, stay at home and follow safety protocols to keep yourself and your family members safe from the virus!