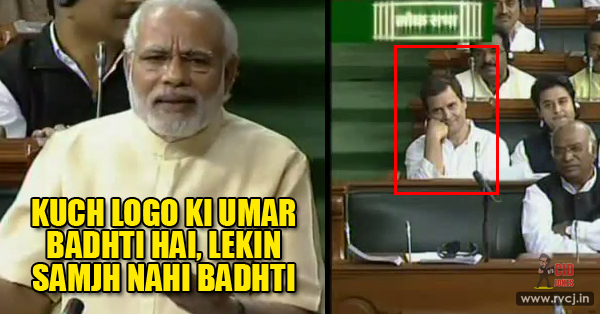 It would not be wrong to name this Session of Parliament as SESSION of AWESOME SPEECHES. It was Smriti Irani first who with her emotional speech made it to the Headlines and whose speech went on to be viral all over the social media. Yesterday we shared with you something that was really unexpected, a flawless speech by Rahul Gandhi who is very popular to deliver speeches with mistakes and misstatements and today our own Prime Minister nailed the opposition with his humorous and fact based speech.
Yesterday Vice President of the INC Mr. Rahul Gandhi attacked Prime Minister Narendra Modi and ruling party Ministers over the sensitive issues of JNU & Rohit Vemula’s Suicide. He in his speech reminded Modi about the promises Modi made to the people of this country before the Lok Sabha Elections and questioned Modi and his party about how much did they deliver in the recent 2 years. Rahul Gandhi in his speech spoke about Inflation and increasing prices of commodities.
Today Prime Minister Narendra Modi had a powerful comeback with his speech answering to most of the questions asked by Rahul Gandhi.

You can watch the entire 1 Hour Speech HERE

It was a powerful speech where PM highlighted many issues which was looked after by the government for India’s development. But PM in the course of his speech didn’t answer few other questions raised by opposition which we as citizens of India surely need some answer. The issues involved : EPF Tax, Black Money, JNU, Rohit Vemula’s Case & Haryana Jat Riots. We surely believe that answers on these questions will be soon answered too.

Reactions of the Leaders of Opposition made it very clear on how powerful and accurate the speech was. There were mixed reactions of people on Twitter. Have a look at how twitter reacted to the Epic Speech By PRIME MINISTER MODI.

[email protected] should leave politics, get married 2B a good husband, only way he can do something which @narendramodi couldn't#NaMoInSansad

#NaMoInSansad This is called shooting with the enemies gun. Using Nehru, Rajiv & Indira he demolished Sonia-Pappu. Congress is no match.

When #NaMoInSansad giving speech: Sonia Gandhi caught checking whether people from her party are clapping or not?😂😂😂 pic.twitter.com/enWQxbe4Am

We have not been able to remove poverty in the last 60 years: @narendramodi in Lok Sabha#ITVideohttps://t.co/4YsOu8awbY

Rahul Gandhi lucky to have one of India's finest orators ever as his enemy. Not everybody gets live tutorials of this quality. #NaMoInSansad

Look at both of his expressions..
caught red handedly.. 😅😅😅#NaMoInSansad pic.twitter.com/6anqxqRU7k

OMG! Sonakshi Sinha Is Doing Something Which Not Everyone Can Do! All The Best For That Sona!
This Twitter Conversation Between Uday Chopra & Ayushmann Khurrana Will Make You Go WTF