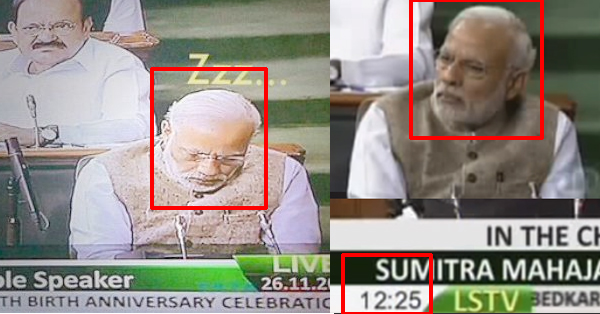 Images say a thousand words.. True..But there are many things which images hide in itself. And there are many instances where Images speak only half the story of what the real situation was. Images can tell you a story in a manipulative way..It can provoke you for something which never even happened. And if we talk about Images on Social Media, then you should think for once before blindly following the Image.
We on social media till date have witnessed many such events where a simple image has been manipulated and shown as something else which is either not true or which has nothing to do with that particular event. Like recently a Sikh Man’s selfie in a wash room was edited and people showed him wearing a Bomb Coat and made his picture go viral on social media.
Similar case came up yesterday when PM. Narendra Modi’s pic was viral on social media which said that PM facing Jetlag trouble, sleeps in the Parliament. The image went on to be so viral that even Media houses couldn’t resist sharing the Image with a concerning Caption. The entire social Media went Gaga over PM’s Jetlag issue and made fun of it. But today another video got viral, thanks to somebody’s smart observation. This video busted yesterdays fake image and clearly shows that PM Modi wasn’t actually sleeping but he just Bends his head down for a few seconds and raises it back. Have a look at this video to understand this.

Hence proved that Modi wasn’t taking a Nap and was keenly listening to whatever Rajnath Singh was speaking. And this also shows us that we in no way can trust any image going viral on social media & if we do, we are doing nothing but making a fool out of ourselves.

Continue Reading
You may also like...
Related Topics:Modi, SLeeping in lok sabha, This Video Clearly Busted The Viral Pic Of PM Modi Sleeping In Lok Sabha. Shows He Wasn't

Delhi Girl Goes To Chemists & Asks For [email protected]@M. Their Reactions Make Us Think We Are Living In Hell
WATCH : A Woman Commits Suicide By Jumping In Front Of Delhi Metro Train