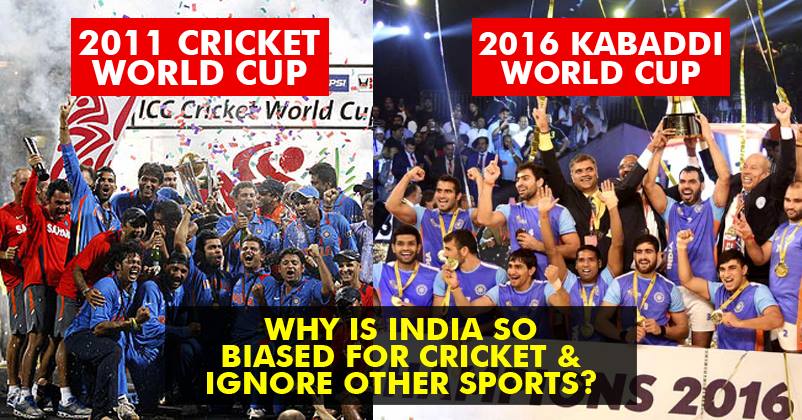 A patriot is not a person who shouts a set of slogans for his country, but is a person who makes his country proud. He can be a farmer who sows the seeds of our future, a soldier who guards our future or a teacher who educates our future and much more. A sportsman or an athlete is also a patriot when he represents our country and fights hard to win a medal or match for us.

The definition of an athlete or a sportsman can’t be defined to just one narrow stream that nowadays leads to just cricket in India. Cricketers are just a small part of the big fraternity like ATHLETES. There is lot more into sports than just cricket. But sadly, we as a nation has failed to give the respected rise to the rest of the sports.

We just can’t blame the failure of it to just one organization or a person. But this time, I personally feel that the media should have focused more on at least promoting the rest of the games. Recently, The Indian Team won the Kabaddi World Cup 2016 and this is how I came to know about it. Half of the FRONT PAGE has been covered by a sponsored ad while the other half of the page has been junked by various news and then there we have a small 7 lines paragraph on the left-hand side where the great leading newspaper of our country has declared India’s win in Kabaddi World Cup 2016. Is that how they should have treated our national heroes ? However, generally, they don’t do that when it comes to cricket. Here is the front page of every newspaper of India on 3 April 2011, the day after India won Cricket World Cup 2011. Not even a bare single space was left out to cover the whole story. And this is not just about the front page. The first 3-4 pages were fully devoted to towards the celebration. Now, it is really good to cover stories like that but it is pathetic to cover stories related to ONLY cricket and not about any other sports in India. Kabaddi is for sure more dangerous than cricket in terms of injuries and life risk. In cricket, players have adequate protection so as to keep themselves away from injuries, but Kabaddi players don’t have the luxury of wearing these protection guards and performing at the same pace. And it was not the front page that made me feel worse about the situation. It was the SPORTS PAGE that was unexpected. When your national team has won the world cup, the news is always expected to be given the utmost priority to be shown at least at the top of SPORTS PAGE if not on the FRONT PAGE of the newspaper itself. But sadly, the news of about the victory of Kabaddi team was shown at the last page of Newspaper which had just a mere 400 words article about it. JUST 400 WORDS. And this is how they expect to increase the popularity of the game. It is important for all the leading newspapers and specially for TOI who chest thumps to be the best in business to understand that these Kabaddi players deserve more than what they have been getting. They are our national heroes and should be respected with the same dignity as how we respect our cricketers when the win any series or match for us.