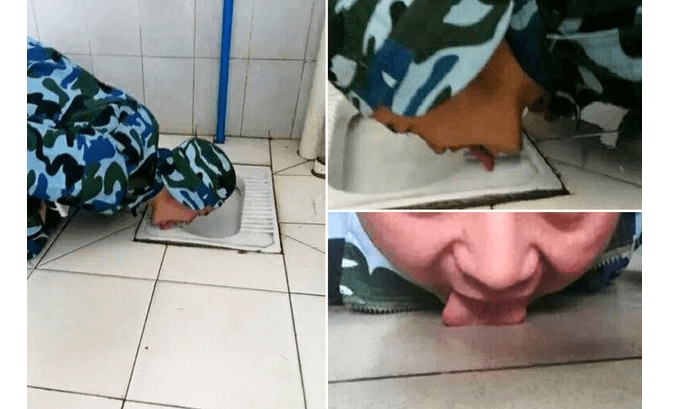 Chinese Army Cadet licks the toilet to prove to drill master that it is properly cleaned.

Sergeant Cai Peng had given the order to new Army recruiters/cadets to clean their dormitories and the bathroom. He told them that it should be spotlessly clean. After few hours when he came back, he saw that it has not been cleaned upto the standards. He was furious that it had not been done to his satisfaction.

He started shouting at the students and was furious and told them that they have to under go strict punishment, to which one Cadet stood and spoken up.

The student, named Ho Liao stood up & said the instructor: “Excuse me sir, but I don’t agree and with your permission I would like to prove it that it has been spotlessly clean.”. Young cadet fearlessly bent down on his knees and started licking all the floor including the porcelain of the toilet.

Speaking afterwards, student Ho said: “He told us he wants the floor good enough to eat off. We felt we cleaned it to that level that it can be licked, and I just wanted to prove the point.”

The squad were dismissed without punishment, with no further comment from the drill master.