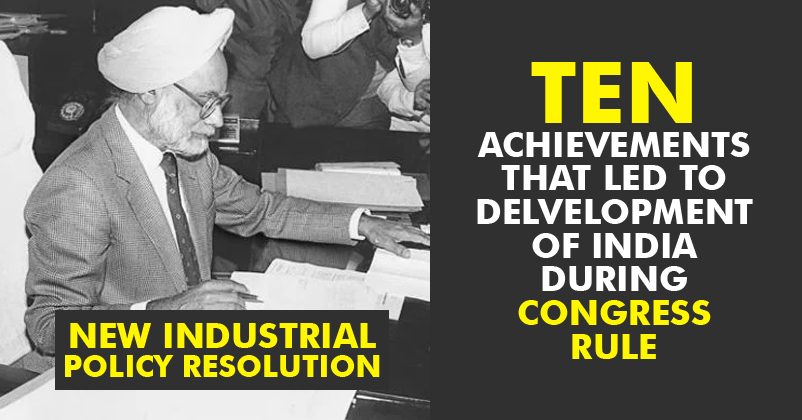 Seems funny, RIGHT? The title of this article and the current situation of Congress Party isn’t really going that well along. Well, as the old man said, ‘TIME WAITS FOR NOTHING’ and hence it changes. Well, in this article I will be talking about the good things that happened during the Congress rule and not the scams and corruption that took place during their tenure. Pardon me, but there are a lot of articles on that topic. And yes, I didn’t vote for CONGRESS, so please don’t consider me as to how Arvind Kejriwal put it like – ‘YE CONGRESS KA AGENT HAI’.

1. During the early years of Independent India, we were nothing. It was the Congress party, particularly Pt. Jawaharlal Nehru who took the efforts of establishing many industries like steel plants, the Bhakra-Nangal and Damodar Valley power and mega irrigation projects, by taking funds from well to do people.

2. After the independence, it was the Congress party that stopped India from getting torn down into more than 600 parts. The problem was dealt by Sardar Vallabhbhai Patel in compliance with the support of Nehru who diplomatically handled the situation and saved India.

3. India became a republic country under the guidance of B.R Ambedkar. B.R Ambedkar laid the foundation of Republic India and on 26th January 1950, the constitution of India came into force. This was indeed a proud moment. The role of Indira Gandhi for indulging in a war against Pakistan for breaking the country to Bangladesh is still considered as the finest decision ever taken. Supporting the civil war and liberation movement of Bangladesh, and then the Army action was a sublime act that helped in securing our eastern borders.

5. When India transformed from a mere wood and cotton selling nation to a big market for advanced IT firms. Before Rajiv Gandhi, the word ‘computers’ were just found in dictionaries in India who nobody cared to look at. But it was him who dared to introduce the IT Sectors in India despite the protest from many political parties.

6. When Manmohan Singh showed that action speaks louder than words and his heroics saved India. The year was 1991, and India was literally bankrupt. And then it was Manmohan Singh as our Finance Minister who pulled us out of the damn pit and introduced the Budget that changed the course of waves and made India stood up once again.

7. When we gave Pakistan the replies it deserved. 1947, 1965 and 1971. Three wars, three victories. The time when India was dealing with inner conflicts within the home, it was the Government that maintained the patience and dealt with the situation in the most diplomatic and yet with an aggressive approach.

8. When Lal Bahadur Shastri gave us the courage to fight in the tough times. During the war of 1965 against Pakistan, India went on a terrible food shortage but it was him who have us the hope and confidence by asking us to maintain a fast for a day in a week. He himself went on a fast for twice a week and abled people followed him. His honesty motivated millions and we dealt with the situation as a family.

9. When Green Revolution stepped in and changed the destiny of India. It was the efforts of MS Swaminathan that drew India towards the path of Agricultural Development and become a wheat surplus country from a country that was importing the same 10-15 years ago from countries like America and UK.

10. When Indians got the power and the RIGHT to QUESTION EVERYTHING ! The introduction of RTI (Right To Information) was the biggest step towards making India more democratic. It was the UPA government that introduced the Freedom of Information Bill in Parliament, in 2002. The bill today gives us the right to hold the authority accountable and question their decision with a positive approach.

Now the points that I have quoted might be controversial as the implementation of it may or may not be initiated by the Congress party at the first place. That is a different story altogether. What is more important is the fact that they were introduced during the Congress rule which has created a huge impact.

Well, I am just an engineering student and I might have gone wrong somewhere in this article. So if you have any suggestion, advice or opinion, kindly share it down in the comment section below.

10 Hollywood Actors Who Worked In Bollywood And Disappeared!
Shocking! Indian Army Was Paying This Huge Sum As Rent For A Land In PoK For Last 16 Years