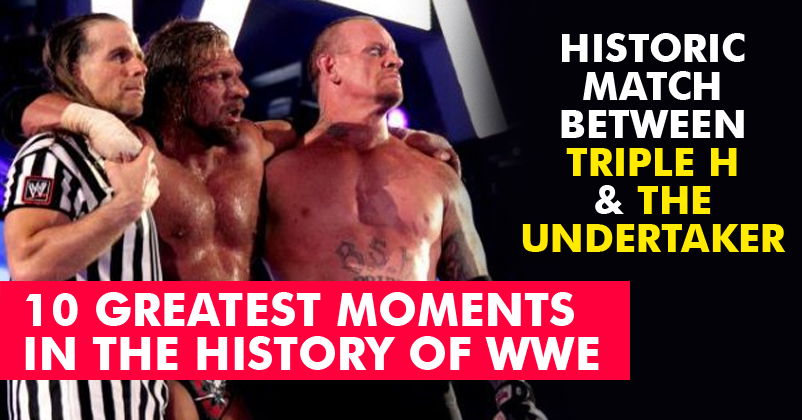 Even if you’re someone who is not a fan of professional wrestling, but you definitely are familiar with ‘WWE’ WWE( World Wrestling Entertainment) is the biggest sports entertainment industry in the world. Many of us have grown up watching professional wrestling. All of you who are reading this, you are here because you love wrestling. It’s something we have loved for a while. Why? Well we all have our reasons. As a kid we even tried doing the wrestling moves on our friends and siblings in the backyard or on the bed. As many of you know that WWE is a sports entertainment industry. It’s not just about wrestling anymore, it’s about entertaining the crowd anyway possible, larger than life characters, bringing out the emotions. WWE is scripted, but it’s not fake. Their matches are choreographed, they have expert creatives who plan the feuds between the superstars, write a story-line. Wrestling superstars are informed about the outcome of the match, what spots to pick, about the moves and the finishers. It’s just like watching a good movie where the story is scripted, but no one comes out saying they didn’t enjoy the movie. The emotions, the dedication, the commitment of the superstars are real. We have the moments that shocked us, amazed us, got us crying, clapping, booing, and cheering. Moreover, these moments transformed us into fans.

So let’s take a look at Top 10 Greatest Moments in The History Of WWF/WWE!

This Is Your Life

On Sept. 27, 1999 edition of Raw is War, Mankind and The Rock were involved in a segment known as “This Is Your Life” which became the most watched segment in the history of WWE. This is a very entertainment segment, the best part is that it wasn’t all scripted, it was an improv. The Rock showed why he is the most electrifying man in all sports entertainment. From his funny insults to Poontang Pie, from making pancakes to slamming Yurple The Clown, this was the greatest comedy segment in Raw and wrestling history. There are some things you just don’t do, like interrupting the great one when he is cutting a promo. But these rules don’t apply to you if you’re CHRIS JERICHO! The Rock was delivering a solid promo in the middle of the ring, and suddenly the “mysterious” millennium countdown clock starts the final countdown, 10..9..8..and it comes to an end…1. The lights go out, music starts playing, and Chris Jericho makes his debut. The crowd went nuts. No star can ever make a debut like this. The main event of Wrestlemania XV was set, it was Rock and Austin for the WWE Championship. A week away from Wrestlemania, The Rock was in the ring along with Vince and Shane McMahon. The Rock was cutting his promo, insulting Steve Austin with his catchphrases and nursery rhymes. Austin had enough of it, decided to make his presence felt. He drove a full-fledged beer truck to the ring. He entertained the crowd with a beer bath, spraying the McMahons and The Rock with the beer. The biggest pop ever

WWE found its resurgence through the Austin-McMahon rivalry, one of the most meaningful and profitable rivalries in the history of WWE. Their feud helped in launching the careers of many stars like The Rock, Triple H. So when Mankind was given atitle shot against The Rock for the championship. It was a DQ match, the ring was surrounded by the Corporation and Degenation X. So when all hell broke loose, the glass broke and Stone Cold came marching down the ring. Austin hit The Rock in the head with a chair and pulls Mankind on top of him for the three-count making him the new champion. CM Punk took the frustrations of everyday wrestler in the wrestling industry. He blasted off the WWE management for poor booking. He also became the voice of the voiceless the moment when he shattered the Super Cena image. Punk announced a week prior that his contract was set to expire at next month’s Money in the Bank. Since he had nothing to lose, he poured all his emotions in his promo. He crossed a lot of limits, said a lot of things about WWE that no one could have imagined. This promo made CM Punk a much bigger star than he ever was. This promo showed the world why Punk is indeed the best in the world. The greatest moment of Daniel Bryan’s career was winning the WWE Championship at WrestleMania XXX. Earlier Bryan was not involved in WWE Wrestlemania plans. Daniel Bryan made a stand against ‘The Authority’. His supporters took over the ring and surrounding area. He was finally granted his big chance, but it was never easy. Daniel Bryan had to beat Triple H to gain entrance into the main event match. In the main event of the WrestleMania, Daniel Bryan defeated Randy Orton and Batista to win the WWE World Heavyweight Championship. The underdog ultimately realizing his biggest dream at the biggest stage of wrestling. Two of the greatest superstars in professional wrestling history putting on one of the greatest Wrestlemania matches the WWE Universe has ever witnessed. Shawn Michales faced Ric Flair at Wrestlemania 24, the stipulation was that if Ric loses, his career is over, he has to retire. The match was an emotional roller coaster of a ride, the superstars went back and forth, some close finishes, towards the end of the match Shawn hesitated to go for the finisher, but Ric Flair begged Shawn to hit him with the Sweet Chin Music. The fans shed tears and clapped to appreciate and bid adieu to Ric Flair. End of an era

There is one moment which will truly stand the test of time. These three superstars live and breathe wrestling. For more than twenty years, these legends have consistently created magic. Simply by being able to tell a simple story in the ring. The match had chemistry, false finishes, drama, emotions, steel chairs, everything a wrestling fan could ask for. The Deadman helping Triple H and lifting him to his feet in an act of great respect. It was truly an end of an era. Every time the great one makes a return, it is electrifying and very special. It’s one of those moments which makes you realize how much of a fan you really are. In 2003, when La Resistance interrupted Mick Foley, the Rock came out of nowhere to save his friend. The crowd went crazy and the rock proved why he is one of a kind. When he made his return to WWE after 7 long years, he went on to deliver another A+ promo. He reminded people that no matter how much time he spends away from the ring, nobody can or ever will, electrify quite like The Rock. There’s no bigger name in the wrestling world than Hulk Hogan. In the 80’s Andre was a famous name, Hogan was starting to become popular among the fans. The stage was set at Wrestlemania, it was the passing of a torch. In the match Hogan attempted to slam The Giant, but he couldn’t. Andre fell on him and nearly pinned the champ. Andre dominated the match, it looked like Hogan would lose the match. But then Hogan gained the momentum, started to ‘hulk up’, the hulkamaniacs were cheering him, he did the impossible by lifting The Giant and delivered an unforgettable body slam.

PVR Starts Advance Booking For Kaabil And Ignores Raees! RVCJ’s Detailed Analysis Of Screen Count!
This New Trailer Of Jolly LLB 2 Shows What All Is Wrong With Our Judicial System