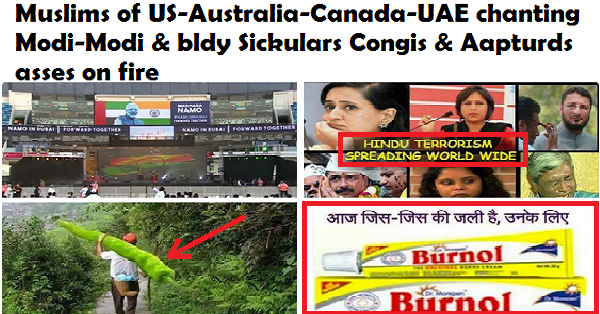 In an attempt to strengthen relations with UAE, Prime Minister Narendra Modi is on a two-day visit to UAE, where he has been welcomed with open hands and open hearts.

One of the main features of his visit is that UAE Crown Prince Sheikh Mohammed bin Zayed Al Nahyan has allotted a land for making a temple in Abu Dhabi. Other than this he has found support from UAE in countering terrorism and he indirectly sent a message to Pakistan from the land of Arabs that the excuse of “Good Taliban and Bad Taliban” won’t work anymore.

In his speech from Dubai Cricket Stadium, he said, “Those who are involved in terrorism should be punished. India has been a victim of terrorism for the last 40 years… The world has to decide whether you are on the side of humanity or on the side of terrorism. There is good terrorism, bad terrorism and the good Taliban and bad Taliban formulation will not work anymore.”

He also asked the crowd to give a standing ovation to the Crowned Prince for allotting land for temple.

Modi talked about his achievements in one year and he did not miss the opportunity to target opposition from disrupting development.

Twitter flooded with #ModiInDubai ever since and here are 17 tweets showing mixed reaction of people on Modi’s visit:

I have seen Modi rallies but this #ModiInDubai is another level, crowd response is unbelievable

We don't look at the colour of the passport for Indians. The colour of our blood is enough: PM #ModiInDubai pic.twitter.com/RKLNnBVSC3

#ModiInDubai speech is among his best. Never seen him dedicate so much energy, passion, time & ideas to just one theme -jobs for youth.

You cannot hear Modi and not get inspired.. This is the leader that young India needs.. Modi Modi#ModiInDubai

This be taken as an endorsement for how great the Speech was.#ModiInDubai https://t.co/zml5Wqucig

Without naming it so many clear tags for Pakistan by @PMOIndia in Dubai Speech. From terrorism to trade, several swipes #ModiInDubai

Today you are hearing vision and achievement of PM and Tommorow you'll listen mental bankruptcy of opposition whole day..#ModiInDubai

Joyful faces with cheer at #ModiInDubai.
This historic address by @PMOIndia in UAE, is progressing like a rock show! pic.twitter.com/hgpbdjYbcq

Hate him all you want, but you cant deny the fact that India finally has a PM that commands respect in every country he visits. #ModiInDubai

When Modi says- Lekin Kuch logon ko thodi takleef hoti hai'..Congress gets confused if he is talking about Pakistan or Congress #ModiInDubai

#ModiInDubai
Truly a world class leader.
Loving his speech.
So proud to have him as our PM