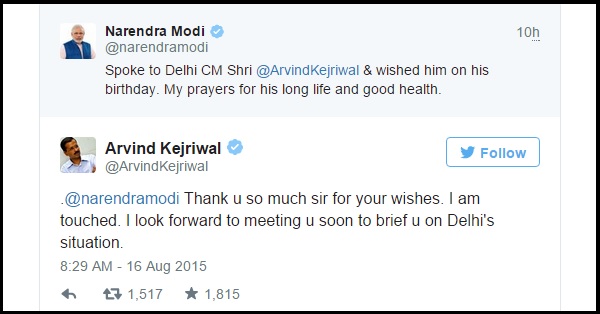 Arvind Kejriwal was born on 16th August 1968. He was a Social Activist before Entering Politics. Arvind Kejriwal is the National Convener of Aam Aadmi Party (AAP). He worked as the CM of Delhi for a Brief Period of 49 Days from 28th December 2013 to 14th February 2014. Later in the 2015 Assembly Elections of Delhi his party AAP has Swept away all the Records by winning 67 of the 70 Assembly Seats.

Here Presenting you some Best Tweets on his Birthday

1. Wishes from the Prime Minister

.@narendramodi Thank u so much sir for your wishes. I am touched. I look forward to meeting u soon to brief u on Delhi’s situation.

2. Even the God knows his Birthday

Rare Pic of Arvind Kejriwal getting Birthday Bumps from his Friends. pic.twitter.com/qhHREewrUI

When bae sends you her wedding card pic.twitter.com/CnWucAf1A5

Happy Birthday, Arvind Kejriwal #JiyoHazaroSaalAK You have been a God’s gift to Indian political landscape… pic.twitter.com/G7Q6Ux6bth

Join us in Wishing the Arvind Kejriwal. Post your Wishes in the Comments Section.