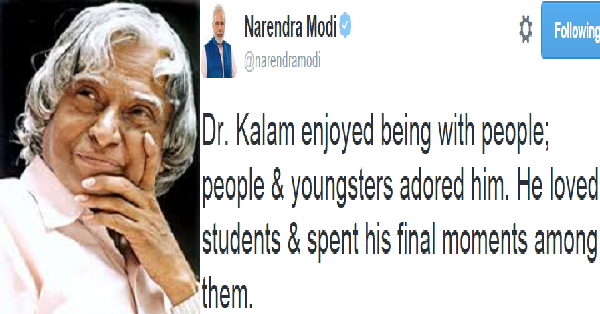 The former president of India, Dr. APJ Abdul Kalam breathed his last on Monday, July 27, 2015 in a hospital of Shillong. The legendary “Missile Man of India” contributed significantly in areas like launch vehicle technology as well as ballistic missile. The 84 years old great scientist had been on a visit to Shillong for delivering lectures of IIM (Indian Institute of Management). It was at that very place that he collapsed at about 7 pm and at once hospitalized in a private hospital which was located in close proximity. However, sadly enough, he left this world there, causing a great loss to the nation.

National Mourning of 7 days is declared by Indian Govt. on his death. Twitter is also low and this is how people are paying tribute to the great man:

Dr. Kalam enjoyed being with people; people & youngsters adored him. He loved students & spent his final moments among them.

#abdul kalaam RIP – feel sad, also proud of our nation where son of a humble boatman & son of a tea seller can reach the topmost positions !

In recent history, only a few had endeared themselves to the young&old, poor&the rich, & to people belonging to different faiths #AbdulKalam

The death of #AbdulKalam is an irreparable loss to this nation. He has left a big void hard to fill. I deeply mourn his death: #RajnathSingh

#AbdulKalam – One&Only President ever who made his presence evryday thru his actions & A Great Role Model 2 Youth. #WingsOfFire never falls

RIP #AbdulKalam – u were an inspiration to many! Brilliant, yet humble and kind! A rare breed! Heartbreaking news! pic.twitter.com/ZA9ohWCBSt

RIP #AbdulKalam .The nation has lost a visionary man who we were lucky to call Indian and our own. The nation will always miss you

It was a life time opportunity to travel with #AbdulKalam. I was very fortunate in this regard. pic.twitter.com/2dW7QEnwSc

Huge loss for our Indian Nation.
Very disheartening to hear about the demise of #AbdulKalam .#RIPDRAbdulKalam pic.twitter.com/j8oe5eYxM2

One of the greatest patriots who always wore Indianism on his sleeves. A gr8 human being who was n wl be loved by one & all. #abdul kalaam

RIP #AbdulKalam u left an indelible print in my heart! Respected u ton! We need more leaders like u! pic.twitter.com/svERRz8FFh

#Sudesiruralbpo request God 2 keep our mentor #abdulkalam soul to rest in peace. Sir we miss u and know u r with us pic.twitter.com/P1oIOc81Up

KRK Has Completely Lost It This Time!! Puts Nation To Shame!!
11 Important Google URL’s You Should Know It Right Away..!!