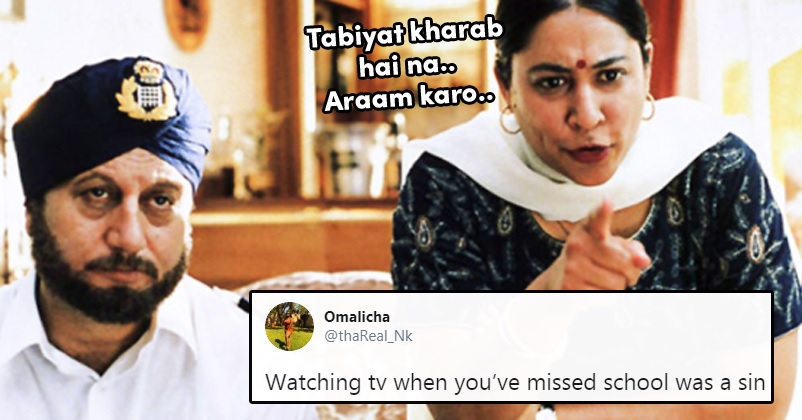 There is no denying the fact that the school life is the best time of our lives as we have ample time to spend with our friends, play games and have fun. However, there are times when every kid likes to avoid going to school due to some reason and try to take a leave by making an excuse of being sick. While parents occasionally let their kids take leave from school, most of the times they feel that their child is doing drama, making a lame excuse and is not sick.

The fact is that the Indian parents believe that if their kid is sick, he should take rest, should not laugh, not eat much, not watch TV and also not look at his phone. Recently, a Twitter user started a discussion on the same and wrote, “In ethnic households if you laugh while being sick, ur no longer sick” and soon the micro-blogging site was flooded with responses from netizens who had been through the same pain.

In ethnic households if you laugh while being sick, ur no longer sick

Twitterati shared their opinion on the matter of being not well in ethnic families and what act can make the sickness look fake, even though they have actually fallen sick.

“You can laugh but not get up for school? Last time I let you do this”

Had to show NO joy, not even an ounce of liveliness or else I was putting on that uniform and going school😭

i was literally going on my phone for a second and laughing at a video i saw and my mom is like “so ur ok now?” like KASJDJDBDJSBWJWDN no im not noel😔

when u play on ur phone or watch a movie and they say ur not sick….

Can’t even touch your phone or play video games to distract yourself from the pain bcz it means ur “not sick”. Like yes I am mama I’m just trying not to think.

Literally had to do a Kanye if I was in the same room as my mum or I was Deffy going to school. pic.twitter.com/oLCkMfVYbb

Can't even laugh at a joke or smile just have to frown and look miserable for a whole two days.

Watching tv when you’ve missed school was a sin https://t.co/ywokMLOPfB

While it is absolutely correct that kids fake illness sometimes in order to save themselves from going to school, it is also true that it becomes difficult for the child to stay in house even if he is really sick because parents ensure that their kids don’t exhaust themselves by engaging in any type of activity, be it watching a movie, playing games or surfing the Internet.

Do let us know if you have also faked illness in your childhood and what it was like being sick in your household.